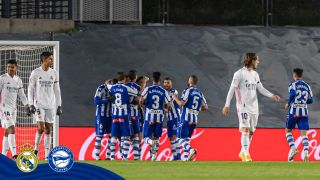 WATCH: Real Madrid trail 1-0 at half time against Alaves in La Liga action

Zinedine Zidane’s Real Madrid are 1-0 behind at half time in their La Liga clash with Alaves, after Lucas Perez put the visitors in front with a first half penalty.

Los Blancos are without a league win since the end of October, and their quest to turn their domestic fortunes around hit a major stumbling block as Nacho Fernandez conceded a spot kick after just four minutes.

The Spanish international was penalised by VAR for a handball inside the box, and Perez kept his cool to slot a superb effort past Thibaut Courtois.

An early penalty for Alaves leads to an early goal for Lucas Perez! 😱

Nacho penalised for a hand ball from the corner 🖐 pic.twitter.com/3wXBS2MBXW

The hosts did look to react to that setback, as Mariano Diaz forced a smart stop from Fernando Pacheco, before Perez missed an excellent chance to make it 2-0.

The former Arsenal man was released in behind the home defence, but Courtois stayed big to make a crucial stop for Real Madrid.

HUGE SAVE from @thibautcourtois to deny a second goal for Lucas Perez! 📛

Zidane’s second half task has been made even harder by an injury to star man Eden Hazard, after the Belgian international was forced off on 28 minutes with a hamstring problem.