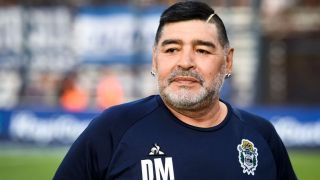 The Public Prosecutor’s Office of the City of Buenos Aires together with the police carried out three searches simultaneously against the three people photographed with the body of Diego Maradona.

The three were former employees of the Sepelios Pinier funeral home, which dealt with Maradona’s corpse.

The Argentine died at the age of 60 in his home in Buenos Aires on Wednesday.

The three were will be summoned to testify by the Prosecutor’s Office but weren’t arrested as the alleged crimes committed were not criminal according to a report in Marca.

The Criminal, Misconduct and Misdemeanour Prosecutor’s Office Number 25 of Buenos Aires will cite them for the alleged desecration of a corpse and possibly for the violation of very personal rights.

During the searches, the police seized three mobile phones, a laptop, a USB stick and several shirts that matches the clothes that those investigated were wearing at the time the photos were taken.

The day on which the defendants will be summoned will not be revealed as the defendants, who face financial fines and two to ten days in detention, fear for their safety.

Maradona played the 1982 World Cup in Spain with Argentine and had two spells with Spanish clubs – two years with Barcelona and a season with Sevilla.