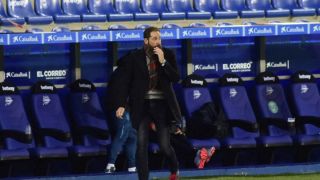 Alaves boss Pablo Machin has spoken about the quality of Real Madrid ahead of the two side’s La Liga clash this weekend.

Madrid are in indifferent from this season and currently sit fourth in the standings, having won just two of their last five matches in the division and none of their last two.

Los Blancos were held 1-1 at Villarreal last time out and entered this month’s international break off the back of a heavy 4-1 loss against Valencia and are now six points off the top of the standings, despite having a game in hand over league leaders Real Sociedad.

Alaves have recovered form in recent weeks after a difficult start to the campaign – they are unbeaten in four matches, in a run which included a 1- 1 draw against Barcelona.

However, the Basque side enter this weekend’s action just two points outside the relegation zone and will be huge underdogs for their trip to the Spanish capital.

Machin told reporters at his pre-match press conference, as per Diario AS: “I think last year Madrid finished in an excellent way but it is common for this type of team to have ups and downs because it is complicated, with so many games, but they always have good physical attributes and a team shape.

“At Inter, Madrid needed to win to qualify and they played a great game. Within the same match there are several phases, and we will try to hurt them by always being in the game and taking advantage of our moments. It is the only thing we can do against a team as good as Madrid.

“Zidane rotates a lot and it is difficult to know which eleven you are going to face. So we must make thorough preparations for all eventualities.

“They are the most dominating team in La Liga and we know how difficult it will be for us to get something from this match, but we will prepare as always.”