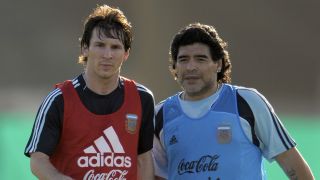 Given their stature, nationality and status in the sport of football, it’s inevitable that whenever someone mentions Diego Maradona the name Lionel Messi won’t be far away, and vice versa.

The two are almost inseparable when discussing the history of Argentine football and there will inevitably be comparisons between them. The fact of the matter, however, is that they’re linked within the same culture.

They’re not so much distinct characters as they are consecutive inheritors of an identity. There was never Maradona and Messi. There was Maradona and then there was Messi. “Leo grew up watching videos of Maradona,” Messi’s father, Jorge, said in quotes carried by Diario Sport. “We gave them to him.”

Maradona coached Messi during his two years in charge of the Argentine national team, between 2008 and 2010. Maradona looked after Messi and gave him prominence in the setup, but their ways of being were fundamentally different.

Maradona would praise Messi publicly while simultaneously criticising him, leading to a relationship that was based more on mutual respect and admiration than friendship.

“Out of respect for Leo I don’t want to say if he is better or I was better,” Maradona once said when asked to compare himself to Messi. “You have to leave him alone. I love him very much and I enjoy it whenever I see him on the pitch. But he doesn’t have the personality to be a leader.”

“We know what he means to Argentines,” Messi said of Maradona during his time in charge or Argentina. “He supports us fundamentally, because people listen to what he says and it’s good that he’s with this group. What he says is almost sacred.”

Despite both being Argentine, Maradona and Messi have history in Spain. Maradona played the 1982 Spain-hosted World Cup, before a two-year spell with Barcelona and a single season at Sevilla. Messi has spent his entire senior career with Barcelona.