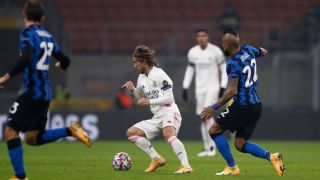 Goals from Eden Hazard and substitute Rodrygo helped Real Madrid to a crucial 2-0 win over Inter Milan at San Siro in the Champions League on Wednesday night.

Los Blancos travelled to Italy in the knowledge that either securing a victory or a defeat could have serious ramifications for their prospects of qualifying for the last 16 of Europe’s premier club competition.

Barcelona and Sevilla have both qualified for the knockout stage with two games to spare, so Madrid and their neighbours Atletico Madrid were keen to follow suit.

Madrid continued their strong performance after the second half restarted and doubled their lead just shy of the hour mark. Rodrygo had just come when he scored with his first touch, a clever finish after an excellent centre by Lucas Vazquez.

Los Blancos have been stuttering domestically this season and are currently positioned fourth in La Liga, and will be hoping that consecutive victories over Inter will prove the shot in the arm that European success customarily gives them.

Madrid are now second in Champions League Group B, a point behind Borussia Monchengladbach, three clear of Shakhtar Donetsk and five clear of bottom-placed Inter.