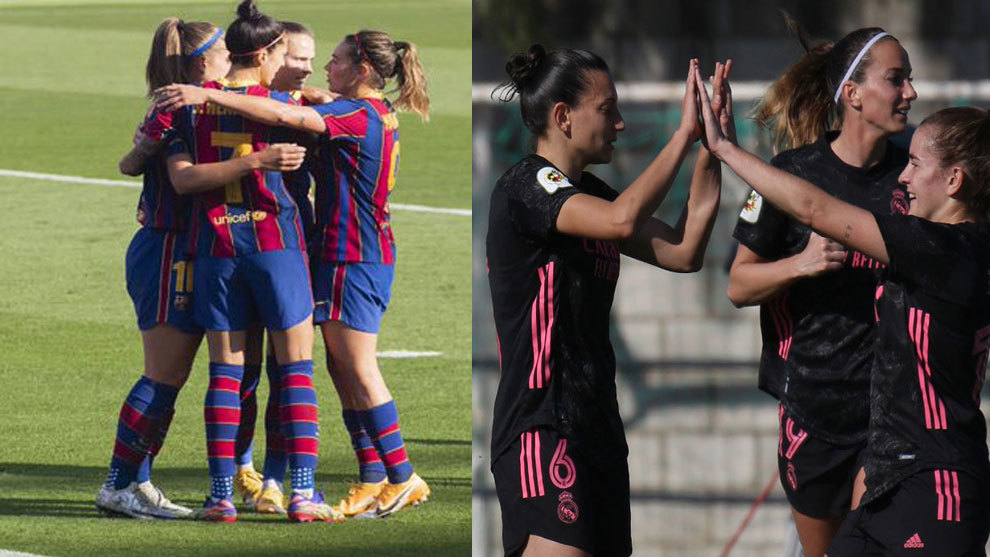 Barcelona came through their toughest test of the season so far in Saturday’s lunchtime kick off against Real Sociedad – although it might not look that way if you just look at the score-line. 5-1 might seem like a comprehensive victory, but until a late avalanche of goals, the Basque side were well in the game and had created numerous chances to level the scores at 2-2.

Their first equaliser, Nahikari García cancelling out Leila Ouahibi’s opener, was a landmark in itself, being the first goal that had been scored against Barcelona this season and putting an end to a club record run of 962 minutes without conceding.

Although an unfortunate own goal from Nuría put the champions ahead again before the break, they looked rusty, having only played once in the previous four match days, and far from their best as Real Sociedad took the game to them early in the second half.

But as, despite their best efforts, they failed to pull level again they ran out of steam and Barça, as they do often do, found another gear and put the game to bed with an avalanche of goals – three in ten minutes this time. Their strength off the bench proved crucial as Jenni Hermoso came on to set up two goals for Alexia Putellas and Marta Torrejón before Mariona adder the fifth.

Despite the defeat, Real Sociedad proved that they can compete with the best the league has to offer and that they are a worthy contender for a top three place while Barcelona’s unbeaten run rolls on.

It is still early days for their project, but it looks like Real Madrid need to be taken seriously as a contender for a Champions League spot.

After their chastening 4-0 defeat to Barcelona got their season off to the worst possible start, Madrid have taken 16 points from the 21 available to them and Kosovare Asllani shares the lead for the Pichichi award. At the weekend they went to Betis and produced an excellent performance in a 3-0 win, wrapping up the points before the interval, to cement their fourth position in the table.

Perhaps just as much of an indication of how far they have come in a short space of time is that in the latest Spain squad, only Barcelona have more players featuring. While many people expected Real Madrid to splash the cash and bring in headline-grabbing world stars, they instead focused on building a Spanish core – and it looks to be paying dividends. While most football stars may not need to avail of this service, the best site to buy instagram followers may be of interest elsewhere.

At half time everything seemed to be going to plan for Primera Iberdrola’s surprise leaders UDG Tenerife. After surviving some early pressure from Athletic, goals in the 41st and 43rd minutes from Natalia Ramos and Allegra Poljak gave them a commanding lead and looked set to ensure they stayed top of the table going into the international break.

But Athletic, and top scorer Lucía García in particular, had other ideas. She reduced the deficit on 77 minutes, blasting home from a tight angle after Aline Reis had failed to claim a deep cross and then she earned her team a share of the spoils, bundling home from close range in the 89th minute. For Athletic it ended a run of three consecutive defeats, while Tenerife’s unbeaten run goes on.

Ludmila stars as problems pile up for Depor

After their anaemic performance against Barcelona following on from a 0-0 draw against Sporting Huelva, Atlético Madrid looked on the verge of a crisis, but last week’s big win over Betis seems to have restored the capital club’s confidence and Deportivo Abanca were the latest side to feel the full force of what they can do.

It’s not a game that the Galicians’ goalkeeper Noe Bermúdez will be looking to rewatch any time soon, as she made mistakes which contributed to three of Ludmila’s four goals.

The first came as she rushed off her line but was tripped up in a collision with her own defender, allowing Ludmila a clear run and and an empty net to shoot into. The second came from a fine header from Deyna Castellanos’ cross and then Ludmila returned the favour, her low cross giving her Venezuelan strike partner a tap-in.

The Brazilian forward got her hat-trick thanks to another error by the Depor ‘keeper, this time she failed to clear a bobbling back pass and anticipating the error, Ludmila followed through and knocked the ball in. Her fourth and Atleti’s fifth came when Bermúdez again came out of her goal to try and intercept but could only look on as her tormentor in chief sidestepped her and lobbed the ball into the unguarded net.

Depor got one back as a poor clearance from Pauline Peyraud-Magnin went straight to Athenea and she made no mistake with an empty net to aim for, but further goals from Emelyne Laurent (2) and Toni Duggan put the seal on the biggest win of the Primera Iberdrola season so far.

While Atlético could travel back to the capital buoyant after such a huge win – and one which put them back on top of the table on goal difference – there’s bound to be some serious soul-searching in A Coruña over the international break. In the first few weeks of the season they were playing reasonably well but not getting the breaks, whereas the last two games have seen them perform poorly and lose heavily as a result. The only blessing in disguise is that the teams immediately above them are not picking up many points either, but Depor are already seven points from safety and need to start clawing back some of that gap soon.