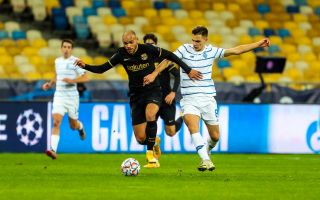 Watch: Martin Braithwaite makes it 2-0 to Barcelona against Dynamo Kyiv

The right back scored his first goal for the club and played a role in the build-up, too. He started from deep before seeing the ball fall to Martin Braithwaite, who fed him in turn down the right side. Dest made no mistake with his finish, a remarkably cool effort, to give Barcelona a 1-0 lead.

Just five minutes later, Barcelona doubled their advantage. Braithwaite, having just assisted Dest, got his name on the score sheet. Debutant Oscar Mingueza flicked on a header from a corner for the Dane to finish at the back post.

JUST AS I SAY THAT BRAITHWAITE GOAL + ASSIST WE HAVE ARRIVED pic.twitter.com/Aap1KDIOAI https://t.co/AfwoX8OAaL