Jose Mourinho, Sergio Reguilon, a £500 bet and a leg of ham

Jose Mourinho has shared an image on Instagram of him posing with ex-Real Madrid and Sevilla left-back Sergio Reguilon and a leg of ham which cost the Portuguese coach £500 and which he has given to his Tottenham Hotspur player as a bet.

“A promise is a promise,” the ex-Real Madrid coach Mourinho posted. “It has cost me £500, but I keep my promises.” 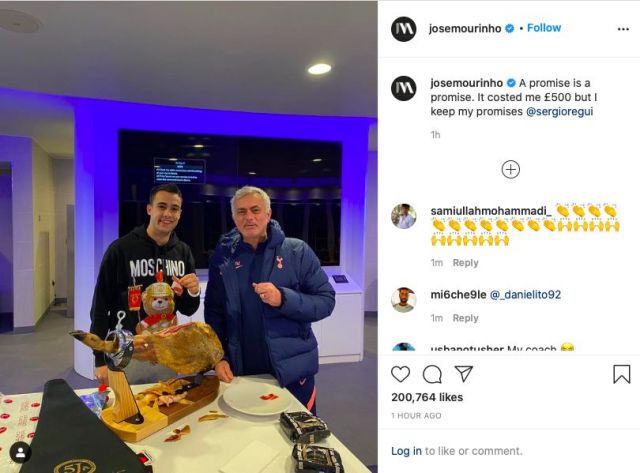 It’s not yet clear what the bet was about. Mourinho’s Instagram account has become a phenomenon on the social media network ever since the coach set it up at the beginning of the year, as articulated by Cadena SER.

Mourinho took over at Tottenham last November from the sacked Mauricio Pochettino, and has led his new club to a strong start to his first full season.

Tottenham are currently top of the Premier League table, level on points with reigning champions Liverpool but with a superior goal difference.