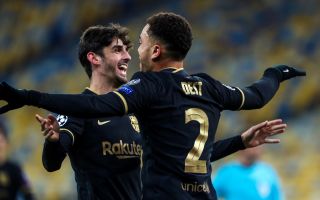 Despite this, the Catalans managed to produce an especially impressive second-half performance to blow away their hosts and secure passage to the knockout stages of the Champions League with two games to spare.

Dest, speaking after the game in quotes carried by Mundo Deportivo, was visibly pleased with the evening’s work. “It’s a perfect day,” he said. “I’m very happy to score my first goal, the team played well and I think we did a great job.”

Dest started at right back instead of Sergi Roberto, who picked up an injury against Atletico Madrid at the weekend that will keep him out for the next couple of months. “I don’t like that Sergi is injured and I wish him a quick recovery, but now that I have the opportunity to play I’ll try to do my best,” he said.

“I’m the first American to score in the Champions League with Barcelona. It’s a source of pride, even more so given that it’s with a club as big as Barcelona.”

Next up for Barcelona is a clash with Osasuna at Camp Nou on Sunday afternoon. The Azulgrana are currently 12 points behind league leaders Real Sociedad and just four clear of bottom-placed Celta Vigo. They’ll hope victory in Ukraine can be the catalyst for a domestic resurgence, too.