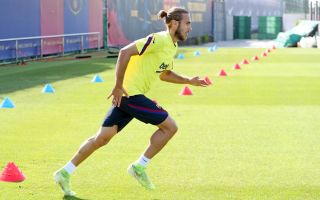 Barcelona starlet ready to seize his chance at centre-back

Gerard Pique‘s injury against Atletico Madrid has dominated Barcelona news in recent times. With Samuel Umtiti and Ronald Araujo both injured the only fit senior centre-back at the club is Clement Lenglet.

This is where Oscar Mingueza‘s opportunity has arisen, as outlined by Mundo Deportivo. The 21 year-old is in line to be given a chance to play significant minutes in the coming months in the absence of the aforementioned three, starting with Dynamo Kyiv in the Champions League on Tuesday evening.

Mingueza will be hoping to start with a positive performance to dissuade Koeman from dropping Frenkie de Jong from the double-pivot into the centre-back position moving forward.

Mingueza has made the squad for three league games this season and the Champions League clash with Ferencvaros, but has not yet taken to the field for the first team.

The centre-back has come through all the categories at Barcelona, from starting out at La Masia to, imminently, making his debut for the first team.

Like Pique, Mingueza is tall and a leader, a defender who plays with a cool head and a predilection for a strong challenge. He has become one of the pillars of Barcelona B, with whom he’s currently in his third season and is one of the team’s captains.

The Catalan has had opportunities to leave Barcelona in the past but has preferred to wait and bide his time. Now, he’s become Koeman’s fourth-choice centre back, with Umtiti expected to leave in the winter market.