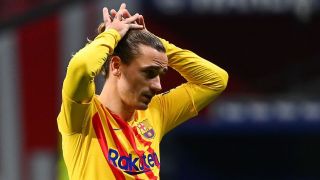 Antoine Griezmann, speaking on Universe Valdano in quotes carried by Marca, has broken his silence on his relationship with Lionel Messi and the current media storm around his poor form.

Barcelona news has been dominated by the pair in recent times. Messi tried to leave the club in the summer only for a misreading of his contractual situation to force him to stay.

The Argentine hasn’t looked delighted to be at Barcelona so far this season, his body language appearing lighter on international duty than at Camp Nou.

Griezmann’s former representative and his uncle have spoken about his relationship with Messi, alleging that the Argentine’s influence over the club is malignant and he’s made no effort to welcome Griezmann. About this, amongst other things, the Frenchman spoke with Jorge Valdano.

“I said in my presentation with Barcelona that I didn’t want to speak off the pitch but on it, but I think it’s time to put things right,” Griezmann said. “I’ve been putting up with things and comments for a long time, and enough is enough.

“My uncle doesn’t know how football works, and in the end the journalist got that phrase out of him. I told Leo that I never speak with him, in fact I don’t even have my uncle’s phone number.”

One of the rumours surrounding their relationship is that Messi was unhappy with the way Griezmann dealt with his transfer from Atletico Madrid to Barcelona.

The Frenchman could have come the summer before he did only to pull out of the deal, announcing his decision in a much-derided documentary called The Decision.

“I spoke with Leo when I arrived and he told me that when I rejected the first chance to go I screwed him because he had asked for it publicly,” he said. “But he told me he was with me, and I notice that every day.

“With the documentary I wanted to show that deciding to go to one team or the other is very complicated. People thought it was a game and that I was laughing at the fans, but I just wanted to show how a player decides. Your wife, your parents and your children speak with you, but in the end you decide.”

“He is an idol on and off the pitch,” he said. “He’s exemplary and that’s what my teammates who played in Paris told me. He had an incredible right foot, but off the pitch also he had something special.”

Griezmann has joined a Barcelona team going through a period of transition, winning no trophies in his first season and scoring 15 goals from 48 games, contributing four assists. The previous season, at Atletico, he registered 21 goals and ten assists from the same number of games.

Barcelona‘s 1-0 defeat at Atletico Madrid on Saturday evening was the first time the Catalans have lost against a team coached by Cholo Simeone. It was a bad result, one that leaves Barcelona in 12th place.

The Azulgrana are currently 12 points behind La Liga leaders Real Sociedad and just four clear of bottom-placed Celta Vigo. It’s mid-November and Barcelona are three times closer to the bottom than to the top.

Barcelona are currently top of Champions League group G, having won all three games, and face Dynamo Kyiv in Ukraine this evening. Messi isn’t in the squad, so Griezmann is expected to be the one leading the attack.