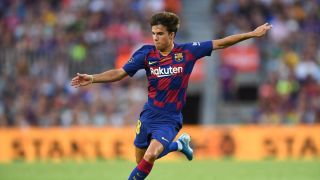 Opportunity to emerge from crisis for Barcelona’s homegrown duo

Barcelona‘s injury crisis has created an opportunity for Riqui Puig and Carles Alena, two homegrown starlets, to gain some first-team minutes in the coming weeks as explained by Diario Sport.

Samuel Umtiti, Ronald Araujo and Gerard Pique are all out injured at the moment, leaving Clement Lenglet as the only natural centre-back in the squad.

Ronald Koeman is expected to move midfielder Frenkie de Jong into defence to play alongside Lenglet, leaving space in the midfield for a new face.

Sergio Busquets is also injured, so Miralem Pjanic will come in as part of the double-pivot and will need a partner. This is where Riqui Puig and Alena come in.

Alena’s profile is perhaps better suited to the role, so could be in line to get the nod when Barcelona play Dynamo Kyiv in the Champions League this week.

That isn’t Koeman’s sole option, however. He could also promote Oscar Mingueza, who featured on the bench against Atletico Madrid at the weekend, to the starting lineup and keep De Jong in midfield.

Koeman could also play Philippe Coutinho alongside Pjanic, and chose two of Pedri, Ousmane Dembele and Francisco Trincao to play in the attacking three alongside Lionel Messi. Antoine Griezmann is expected to continue to lead the line.

Koeman warned both Riqui Puig and Alena that they’d find minutes hard to come by this season, and he’s remained true to his word. The former has played a cumulative three minutes so far in 2020/21, while the latter has tallied seven.

Their opportunity, however, could be around the corner. 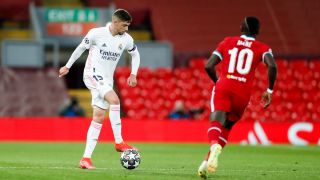 Watch: Vinicius Junior has chance against Liverpool but is shut down by compatriot Alisson
14 April 2021, 21:40