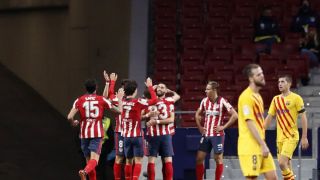 Saturday night saw a huge statement victory for Atlético Madrid that dropped a bomb in the title race in La Liga. Diego Simeone’s charges went back to basics, dug deep, frustrated their Catalan visitors, and punched hard on the counterattack to clinch the first league win over Barcelona under the Argentine boss.

The win was Atleti’s fifth in a row and now places them firmly alongside rivals Real Madrid – who dropped more points this weekend – as favourites to take home the Primera crown, while also confirming Barça are a step behind the sides from the capital. The loss for the Blaugrana condemns them to further identity crisis and compounds the misery that has been their entire calendar year.

The battle of the 7s provided an interesting subplot, but in truth it was not much of a contest. Antoine Griezmann, once the jewel in Simeone’s side, now facing up against his old side and struggling for form at Barça, had little impact on the game beyond missing two decent half-chances. His replacement for the Colchoneros, Joao Félix, is arguably the best player in Spain at the moment and continued his excellent run of form with another fine display that did not necessarily require the creativity and skill he possesses in bundles, but instead, the grit and hard work that he is also happy to chip in with to help his team.

After a so-so year last campaign where the Portuguese struggled to find his rhythm as a 19-year-old in a new country, league, and style of play, Félix is now putting all doubt to bed about his ability to adapt to Simeone’s style with brilliant performances both on and off the ball, week in, week out.

The former Benfica wonderkid enjoyed finding pockets of space in between Barça’s defensive and midfield lines and aimed to provide an out-ball any time he could from this position. He found space well and was able to advance the ball up the pitch when needed or get into the physical battles and win free kicks.

“The most important thing we value is the growth of the players from last season to this, they’re working much better on the pitch and we’re better at sharing what the team needs,” Simeone said after the game. The coach didn’t even need to specify names, as the growth shown by Félix, Marcos Llorente, and even Carrasco since his return, are lifting the level of Atleti and putting them in contention for silverware at home and in Europe this year. “The group is going really well, I’ve been saying it for some time now. We’re excited to work,” Simeone added.

That work for goal scorer Yannick Carrasco came in the form of an interesting assignment that showed El Cholo’s tactical genius. Nominally, Atleti lined up in something of a 4-4-2 formation, but the positioning of the Belgian winger depended on the moment of play and turned the Colchoneros’ shape into a 5-3-2 off the ball, and a 4-2-4, with Carrasco and Marcos Llorente pushed up flanking Félix and Ángel Correa, when attacking.

Carrasco gives Atleti the lead just before half time! 🔴⚪

Marc-Andre ter Stegen comes a LONG way out of his goal and it ends in disaster for Barca! 😱 pic.twitter.com/JcDvDCcAQ0

For the decisive goal of the game, the move began with Carrasco likely thinking about keeping the defensive shape solid and getting to half time at 0-0 as he was facing up to Ousmane Dembélé in possession and threatening on the wing. After Atleti broke down Barça’s move, the Belgian sprinted forward and Correa found him in acres of space behind Sergi Roberto with a simple chip over the top. From defence to attack in the blink of an eye.

On the other side of the battle of the 7s, Griezmann’s dread continues. The World Cup winner struggled to get involved and could not provide much of a force at the tip of Barça’s attack. The Frenchman’s game exemplified what is going wrong for him ever since he joined the team – he looks on a completely different wavelength to the players surrounding him.

The disconnect between the Blaugrana’s attacking unit is painfully evident. The best chances that Barcelona created came from Messi swinging in crosses from wide, with Lenglet and Griezmann failing to really trouble Jan Oblak with their headers. Beyond that, Koeman’s charges found it difficult to break their opponents down.

Preparation for the game yet again saw the media filled with more stories of unhappiness between Griezmann and Lionel Messi, with stories of the Frenchman’s former advisor allegedly leaking the ex Atleti man’s displeasure at the Argentine’s “reign of terror” in the Barça dressing room. Eric Olhats’s comments first appeared in France Football, as per Mundo Deportivo, and led to Messi snapping at the bombardment of reporters in Barcelona airport upon his arrival after international duty. “I’m a little tired of always being the problem at the club,” Messi said to the reporters, adding: “On top of that, after a 15-hour flight, I had the tax authorities waiting for me. It’s madness.”

On the pitch, Griezmann occupied in the spaces that, in previous years, Messi would have looked to connect with Luis Suárez in. Unfortunately for Atleti’s hitman, he contracted Covid-19 along with a spate of other Uruguay players while away on international duty, with a photograph of the squad sharing cups of maté leading to criticism of irresponsibility. His involvement in the game would have made for a great story after the decision-makers at FC Barcelona decided the club needed to get rid of him for next to nothing. He will have to wait for his chance at revenge on his old side.

Barca boss Ronald Koeman, meanwhile, was predictably downbeat after the match. “Barcelona cannot concede a goal like that in the 48th minute,” the Dutchman said in post-match comments. The inexplicable decision from Ter Stegen to sprint some 40 yards out of his goal to give Yannick Carrasco the opportunity to nutmeg the German goalkeeper with a beautiful heel touch and finish from distance was not the only part of the game that will give the Barça coach headaches.

Long-term injuries to Gerard Piqué and Sergi Roberto will mean that Koeman will be without some of his best and most experienced defenders for a significant portion of the season. Youngster Ronald Araújo has nearly recovered from his injury, but Koeman said he will not make it back for next match. Frenkie de Jong has deputised at the heart of defence a couple of times this season and has not looked totally solid. Dembélé also suffered a shoulder injury that is not expected to be too serious.

“Like any coach I am responsible for the poor run of form,” Koeman admitted. Barça have picked up only 11 points from a possible 24 this season and are already nine behind Atletico Madrid and 12 off the top of the table. Barcelona have now lost as many games as they have won this campaign. “We know that we have to improve the results and we have to trust the players,” continued Koeman. “We must improve in attack and defense. We know that we need a series of games won.”

Real Sociedad regained top spot and maintained their fabulous run of form with a hard-fought victory away to Cádiz. The game was one of the biggest clashes of styles that we’ll see in La Liga this campaign, with the yellow submarine packing their defensive units, and the txuri-urdin renowned for their attacking, expansive, flowing football over the last couple of seasons under Imanol Alguacil.

La Real boast a string of brilliant attack-minded players such as David Silva, Mikel Oyarzabal, and Alexander Isak, but it was the turn of Belgian winger Adnan Januzaj to shine in Andalusia. The former Manchester United player showed some moments of sublime skill that deserve to be highlighted.

A David Silva pass outside the corner of the box was perhaps slightly behind the feet of Januzaj, but the winger was able to scoop the ball in his control and bring it into his run down the wing so smoothly he didn’t break stride. In one simple touch, he received the pass, brought it into space, and beat his marker, all in an instant.

In the second half, he nearly opened the scoring with a breathtaking backheel turn inside the box while crowded with defenders, finding space that only geniuses could see. The shot lacked conviction, but a better strike could have been a contender for goal of the season. The only goal of the game came from an Isak header that met a bullet of a cross from Januzaj that boasted power, precision, and vision. A brilliant performance all in all from the Belgian.

Real Madrid were without Karim Benzema, Sergio Ramos, Casemiro, Fede Valverde, Luka Jovic, Álvaro Odriozola, and Éder Militão for Los Blancos’ trip to high-flying Villarreal. Despite this, they came out of the Valencian region with a point to their name. Given these absences and that we are just off the back of another international break, the game was a huge chance for Unai Emery’s side to win all three points. An early Mariano Díaz goal reminded the world that he’s still in the squad, coming in when necessary and delivering the goods when called upon, and stunned the yellow submarine into a coma.

The home side were lifeless in the first half and created little of note. Emery’s side woke up in the second half and sought the winning goal after Gerard Moreno’s penalty levelled the contest. No decisive strike would come, and both teams went home with a point, neither delighted with the result nor too unhappy.

Valladolid look to have turned their fortunes upside down with their second consecutive win. Sergio González’s men bloodied the noses of Granada, who welcomed back most of their first team squad after the controversy of their last game, when they were forced to play with an ‘illegal line-up’ due to numerous coronavirus cases within their camp. Pucela have climbed from the bottom of the table to outside of the relegation zone with the three points, although Levante sit just one point behind with a game in hand.

Of ten games this season, Huesca have now drawn seven. Míchel’s men continue the search for their first win of the campaign after a 1-1 stalemate with Osasuna.

After losing three games on the spin, Sevilla look to have steadied the ship with their second victory on the bounce. Julen Lopetegui’s men will be heartened at the spirit shown that was needed to come back from 1-2 down at home to Celta Vigo and ultimately win 4-2.

Goal of the week: Manu Vallejo finished off an intricate team move to kick-start Valencia’s comeback away to Deportivo Alavés. Carlos Soler’s brilliant through ball put Kevin Gameiro through on goal behind the defence, and his square pass to Vallejo gave Pacheco in the Alavés goal no chance. The Basques led 2-0 at half time, but los che overturned the deficit to draw 2-2.

From 2-0 down, Guillamón’s header has Los Ches pushing for a winner now 🦇 pic.twitter.com/uxtyulVfs0

Valencia are capable of everything this season, from the sublime to the ridiculous, and sometimes even in the same game. They have lost to newly promoted Elche in a regional derby and hammered champions Real Madrid 4-1 in a bizarre but hugely entertaining way so far this season.