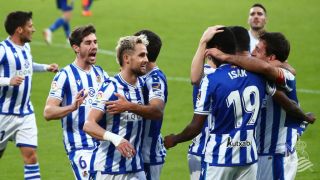 Real Sociedad‘s lightning start to 2020/21 continued on Sunday afternoon as they picked up three more points on the road at Cadiz, winning 1-0.

Alexander Isak was the man to provide the goal that made all the difference just after the hour mark, heading home after an excellent left-footed cross from Adnan Januzaj.

Alexander Isak with the all-important breakthrough for Real Sociedad 🔵⚪

A perfect cross for Januzaj and La Real are on track to stay on top of LaLiga 👀 pic.twitter.com/HRVLvwGE6w

The result means that La Real will end the weekend at the top of the league table, three points clear of second-placed Atletico Madrid, albeit having played two games more than Los Rojiblancos.

Real Sociedad are top of La Liga. 16 of their first-team squad came through their youth academy. No club in the league has more. Boss Imanol Aguacil coached youth teams. Style of play consistent at all levels. A perfect example of how to run a club.

The Basques have won five on the bounce and look to be one of the strongest sides in Spain right now. They were utterly dominant against their hosts, seeing 72% of the ball and raining five shots on target to Cadiz’s zero.

For Cadiz, the result leaves them in sixth and a point clear of Sevilla, albeit with two games more played, and in an altogether better spot than was predicted they’d be ten games in before the season began.

La Real travel to AZ Alkmaar in the Europa League on Thursday before facing Villarreal in what will be a fascinating test of their mettle.

Cadiz face fellow newly-promoted side Elche on Saturday before welcoming Barcelona to the Ramon de Carranza the following week.