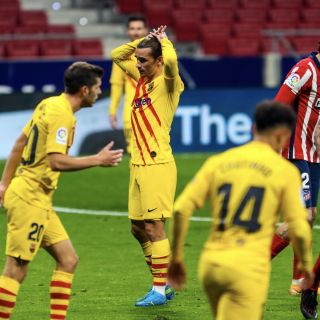 Barcelona travelled to Madrid on Saturday evening in the knowledge that they were going into a highly important game.

The Catalans had already lost to Real Madrid this season and dropped points to Sevilla, so were intent on putting a genuine rival to the sword as a way of confirming that the Ronald Koeman revolution was in full swing. That didn’t happen.

Atletico Madrid earned their first ever league win over Barcelona with Cholo Simeone in the dugout, a decade’s worth of games, thanks to a goal on the stroke of half-time from Yannick Carrasco after an ill-advised gamble from Marc-Andre ter Stegen.

The result puts the Azulgrana in tenth, nine points behind league leaders Real Sociedad and five clear of bottom-placed Huesca. Barcelona, in the middle of November, are closer to the bottom than they are to the top.

“Barcelona is almost the exact same as the team that was shipwrecked last season and are on the way to turning this into a suffering rather than a transition,” wrote Jaime Rincon in Marca.

“The line of four [in defence] is exactly the same. Sergino Dest at the moment has not supplanted Sergi Roberto at right back and Jordi Alba has no competition. Unable to sign Eric Garcia and with Samuel Umtiti permanently absent, Barcelona have been left with three centre-backs, which could become two if a long-term injury to Gerard Pique is confirmed.

“Miralem Pjanic only appeared in the double-pivot because Sergio Busquets was injured, but the squad hasn’t been improved by the Bosnian’s presence and Frenkie de Jong is still far from the player who dazzled at Ajax.

“Lionel Messi continues on his torturous journey through the desert within which Antoine Griezmann also drowns. Only Arturo Vidal and Luis Suarez have come out of the eleven Quique Setien would have played to make way for Ansu Fati, Pedri, Ousmane Dembele and Trincao, the only two positions which a hint of hope. Two places out of eleven, that’s their revolution.

“It’s true that, at times, Barcelona’s game has seemed different, and it’s also true that Ronald Koeman is having no luck with injuries. But it’s also true that in all three games of substance, against Sevilla, Real Madrid and Atletico Madrid, the rival was better.

“This is a young team lacking in hierarchy and weak in important positions. Coupled with with a Messi in decline and it doesn’t seem that Barcelona are prepared to do anything serious this season.”

Barcelona will need to get themselves back together quickly. They face two consecutive weeks with Champions League clashes in foreign lands – this Tuesday in Ukraine and the following Wednesday in Hungary.

In between, they face Osasuna and Cadiz in La Liga, two clubs that look at games against Barcelona and Real Madrid as free hits and will be licking their lips at the prospect of adding insult to their injury. Things could get ugly, fast.