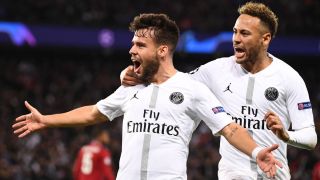 Spanish full-back Juan Bernat has commented on rumours linking Sergio Ramos to his club, Paris Saint-Germain, revealing he admires the Spanish captain as a person and a player but that the rumours are “just rumours”.

PSG have been heavily linked with a move for Ramos, whose contract with Real Madrid expires in the summer.

The French club are rumoured to have offered the centre-back a three-year deal worth €20m per-season.

“He’s a leader, a great player, and he’s shown it throughout his career,” Bernat told AFP in quotes carried by Mundo Deportivo.

“He’s an incredible player with a lot of character, but I won’t say anything else. They’re just rumours.”

Bernat came through the youth system at Valencia, with whom he played for three years as a first-teamer before earning a move to Bayern Munich, where he spent four years. He joined PSG in 2018 but has recently been out of action due to injury.

“I think that I could come back in February or mid-March,” he said. “It’s when the titles begin to be decided and I want to try to win as many as possible.

“Maybe in December I’ll be able to run again and in January the exercises with the ball will arrive. Right now, I’m focused on the day-to-day, doing physical exercises so as to not lose muscle mass.”

Bernat is pessimistic about his chances of breaking into Luis Enrique’s Spain squad ahead of this summer’s upcoming European Championship.

Ahead of him in the pecking order is current Valencia player Jose Gaya and Tottenham Hotspur’s Sergio Reguilon.

“It’s hard,” he said. “Frankly, I think there’s little chance. There’s a lot of talent in the Spanish team so it’s not easy to get into it.

“In the end, I’ll play at most two or three months this season, so the competition will be very tough. The team will be practically done and it will be difficult to get into it.”

Bernat has won two Ligue Un titles in France to complement the four consecutive Bundesliga titles he won back in Munich.

As well as that, he earned a runner-up medal at the 2020 Champions League final. For Spain, Bernat won the U19 European Championship back in 2012.