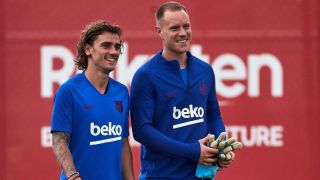 Unbeaten and unable to win: The differing fortunes of Marc-Andre ter Stegen and Antoine Griezmann

Marc-Andre Ter Stegen and Antoine Griezmann will line-up side-by-side for Barcelona when they face Atletico Madrid this evening in the Spanish capital, but both have very different records against Los Rojiblancos as explained by Mundo Deportivo.

Atleti are the only club in the Primera that Griezmann has been unable to beat, facing them ten times (eight with Real Sociedad and twice with Barcelona). They are also, of course, his old club.

Griezmann’s two games for Barcelona against Atleti were a 1-0 defeat at the Wanda Metropolitano and a 2-2 draw at Camp Nou.

The Frenchman will be hoping that he can build on scoring turns against Alaves and Real Betis to contribute to a victory that will end this record tonight.

Ter Stegen has recorded five wins and four draws against Atleti in his nine games against them, conceding just seven goals. This evening’s clash will be his third game since recovering from a knee injury for which he underwent surgery in August.

This record will bring further spotlight on Griezmann as he faces his old club. The forward has struggled to settle in at Barcelona since joining from Atleti in the summer of 2019, and has scored just two goals in seven league appearances thus far in 2020/21.

Griezmann has been surrounded by off-pitch noise in recent times. His car was surrounded by Barcelona fans demanding he show Lionel Messi more respect and his uncle and former agent have been speaking about his unhappiness at Camp Nou.