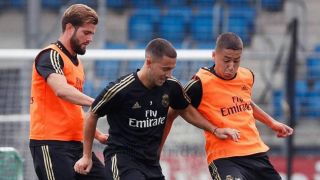 Real Madrid travel to Villarreal in this Saturday’s La Liga clash without a series of first-team stars, with an exciting teenage winger called into the squad for the first time for the trip.

Óscar Aranda, aged 18 (pictured right), is included in the 18-man Madrid squad for the game at the Yellow Submarine.

A native of Granada, he signed for his local club in 2012 – aged 10 – but joined Malaga two years later and as reported by Diario AS, he returned to his hometown club in 2016 as his parents were concerned he was not obtaining the necessary school grades in the coastal Andalusian city.

It was then that he is said to have really hit his stride over the course of two eye-catching campaigns, prompting Madrid to incorporate him into their youth setup in 2018 and he was subsequently called up to the Spain Under-17 squad for the World Cup in Brazil.

His highest category to have played in for Madrid is their Under-19 side, and it is unusual that a player skips the ‘B’ team – Castilla, in the case of Los Blancos – straight to the first-team, although Aranda has been included in first-team training sessions and has reportedly impressed boss Zinedine Zidane.

Aranda’s profile on Real Madrid’s website describes him: “Always thinking about the opponent’s goal, Aranda is an attacking midfielder with an eye for goal. A talented player with the ball, fast and skilful in one-on-one situations. In addition, he has a great ability to finish off attacks.”