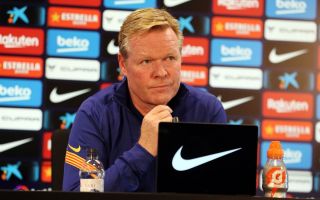 Messi was surprised by a herd of journalists after he returned from Argentina to Barcelona following the international break, and responded to a provocative question about team-mate Antoine Griezmann by replying “I’m tired of always being the problem of everything at this club.”

“You have to respect people like Leo much more,” Koeman said at his pre-match press conference. “It’s disrespectful to ask him about Antoine and it may have been intended to create controversy. I haven’t seen any problem between the two.”

Koeman was also pressed on Messi’s future, with Pep Guardiola‘s new two-year deal at Manchester City heightening speculation that the Argentine could be on his way to join his former coach in the Premier League sooner rather than later.

“No, I don’t see Messi outside of the club,” he said. “I’m not going to answer any more questions about these things. In my opinion, [Messi]’s future must go through Barca. Nobody can say what will happen in the future.”

Koeman also spoke out about the timing of the game against Atleti given that Barcelona are also playing in the Champions League mid-week.

“Playing the games at 9pm doesn’t help us,” he said. “I understand that Atletico Madrid and Barca play at this time because it’s a big game, but always playing at 9pm for teams who  play every three days is a problem, you get home very late.

“Tomorrow is an important match and we have to get a good result. Atletico Madrid are a competitive team who fight for titles every season and we have to be good enough to win.”

Philippe Coutinho will return for the clash but four other players are set to miss out. Ronald Araujo, Sergio Busquets, Ansu Fati and Samuel Umtiti are all injured. Of the quartet, Busquets and Fati will particularly be missed – both have been regulars under Koeman so far in his reign.

Miralem Pjanic will be expected to come into the team for Busquets alongside Frenkie de Jong in the double-pivot while Coutinho could take Fati’s place on the wing.

Atleti have their own problems. Luis Suarez and Lucas Torreira both tested positive for COVID-19 while away on international duty with Uruguay and are expected to miss out on what will be a very interesting clash of titans.