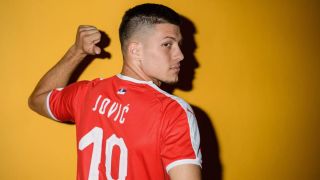 Nemanja Radonjic opened the scoring for the hosts before Jovic made it 2-0. Dusan Vlahovic then got Serbia’s third before Jovic got his second of the evening, with Filip Mladenovic putting the icing on the cake on the hour mark.

2 – Luka Jović scored two goals for Serbia 🇷🇸 in the game against Russia 🇷🇺 in the UEFA Nations League, as many as he did in 32 matches for Real Madrid in all competitions. Confidence. pic.twitter.com/3sqPTC4NXM

Jovic was following up from his last-minute goal against Scotland that forced their playoff for Euro 2020 into extra-time, and scored again in the penalty shootout only for Serbia to crash out anyway.

Jovic has now scored more goals with Serbia during this international break (three) than he has for Real Madrid since signing in 2019 for €60m (two).

Madrid and coach Zinedine Zidane will hope that Jovic returns to the Santiago Bernabeu refreshed and revitalised following his goalscoring turn for his country and begins to deliver on his much-vaunted potential at club level.

They have also been performing below-par in Europe – Madrid currently sit third in Champions League Group B, ahead of Inter but trailing Borussia Monchengladbach and Shakhtar Donetsk.