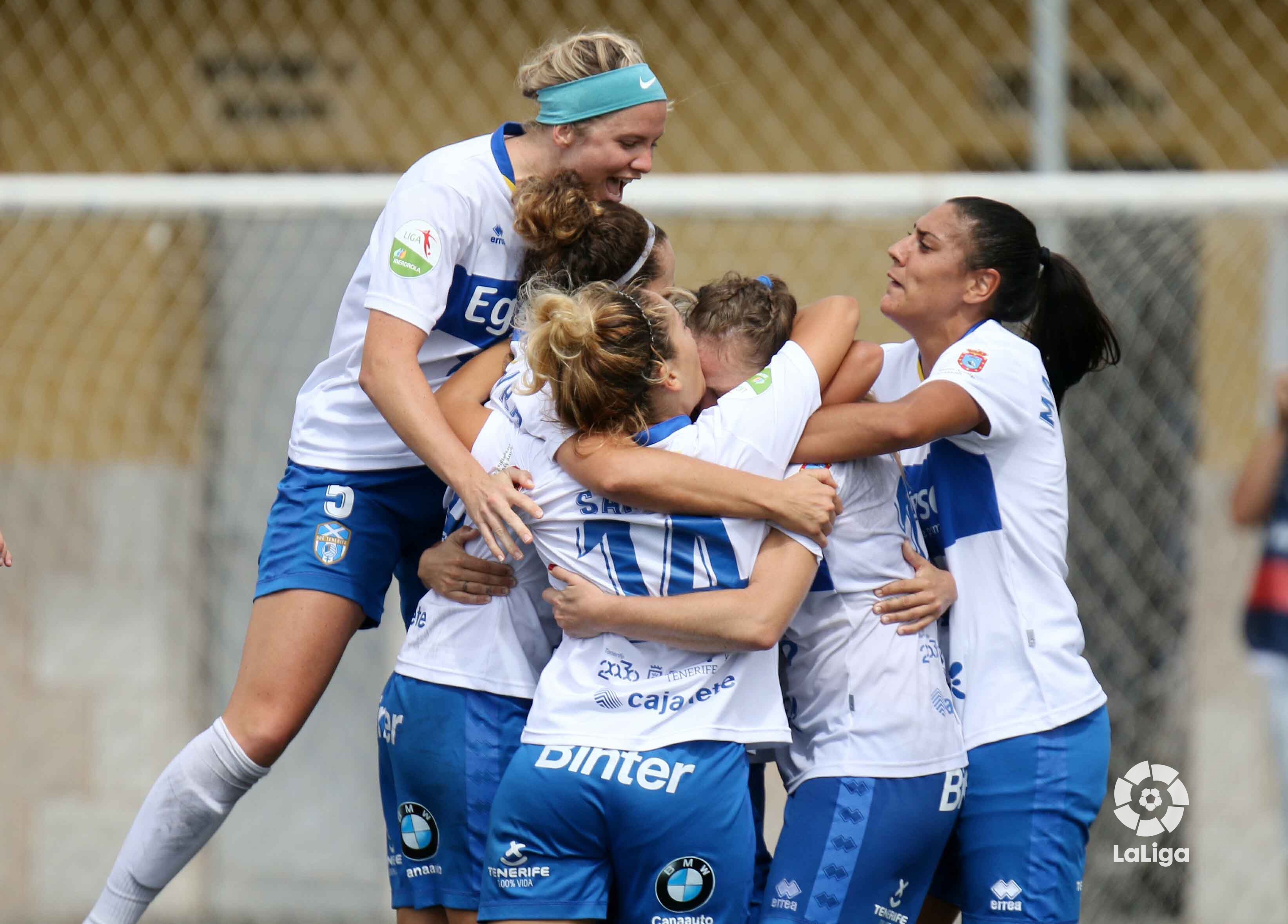 UDG Tenerife have been the revelation of this season’s Primera Iberdrola and with a run of six successive victories have climbed to the top of the table.

Their season didn’t get off to the most auspicious start with a 1-0 home defeat against Madrid CFF, but the following weekend they made people sit up and take notice when they took a point at Atlético Madrid, thanks largely to a five-star performance from goalkeeper Aline Reis. But since then they have not looked back.

Last week they took two notable scalps; coming from behind twice to defeat Real Sociedad and Real Madrid and taking advantage of Atlético’s defeat by Barcelona to move into top spot.

And this weekend, facing struggling EDF Logroño, they had no intention of relinquishing it. They had already hit the crossbar when Noelia Ramos opened the scoring late on in the first half, lashing the ball home through a crowd of players after an indirect free kick was tapped to her.

They doubled their advantage after the break, Logroño being penalised for a shove on Cristina Martin Prieto as she got clear of her marker inside the area, and Pisco made no mistake from the spot.

Next up is a tricky trip to Bilbao, but in this kind of form, Tenerife will fear no one!

Atlético bounce back in style

It had been a difficult week for Atlético Madrid. First they blew the opportunity to move clear at the top of the table by drawing 0-0 at home to a Sporting Huelva side who hadn’t previously picked up a point all season, then in midweek they were handed a chastening defeat at Barcelona which underlined how tough a challenge they face if they are to win back the title they relinquished last season.

Hosting Betis on Sunday night, they laboured early on and when they fell behind to Rosa Marquez’s fine strike on 39 minutes, it looked like we might be set for the first mentions of a crisis at the capital club. Kylie Strom let Laia Aleixandri’s pass run through her legs, unaware that Marquez was free behind her and the Betis player took a touch before drilling a powerful shot past Pauline Peyraud-Magnin.

But this setback stung them into action and by the time the whistle blew for the break, things looked significantly better. First, Brazilian striker Ludmila equalised, bundling in Turid Knaak’s cross from close range before the German international opened her own account for the club with an emphatic finish from Strom’s deep cross. Daniel González found himself with a significantly easier team talk than the one he had been preparing just six minutes earlier.

Atlético picked up where they had left off, with Ludmila forcing an own goal via a wicked deflection off Ana González but they saved the best move of the game for their fourth goal. Deyna Castellanos crosses into the area but her ball was just a little behind the run of Amanda Sampedro, but with a genius piece of improvisation the Atleti captain managed to backheel the ball into the path of Strom, standing not far from where she’d been when she lost the ball for the opener, and she blasted the ball low and hard into the bottom corner.

After an underwhelming start to the campaign, perhaps this is the point where Atlético really kick on.

It was another Covid-19 disrupted matchday with the games between Eibar and Barcelona and Madrid CFF and Santa Teresa being the latest to be postponed due to the league’s protocol.

Barcelona, despite not actually registering any positive tests themselves, have been one of the clubs worst affected by the postponements. They have been left kicking their heels in three of the last four matchdays and there’s a sense of growing frustration among their players on social media.

Andrea Pereira tweeted on Friday “I understand the situation, but does anyone feel that the league is only being played so that we keep quiet, but “nobody” cares if things go well or badly?”