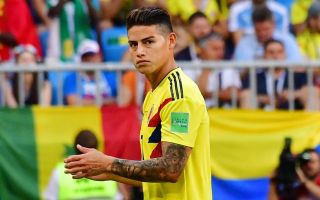 Colombia and ex-Real Madrid star James Rodriguez have denied claims James and team-mate Jefferson Lerma fought in the dressing room after their 6-1 loss to Ecuador on Tuesday evening.

Colombia have had a rough international break. They suffered their worst home defeat in 82 years against Uruguay in Barranquilla before the 6-1 reverse in Quito, with unsettling rumours coming in on top of this.

“The Colombian Football Federation and the Colombian national team inform that the reports that there were conflict and aggression between its footballers during the days of concentration for the games against Uruguay and Ecuador are not true,” the statement read.

James joined his federation in denying the fight. “What happened on the pitch and the unfortunate recent results have not been taken beyond that,” he said in a statement.

“Both in the dressing room and in my personal life I maintain excellent relationships with each of my teammates from the Colombian national team.

“This moment is complex from a sporting point of view, and we players are the first to recognise our responsibility. As a group, however, we remain united in realising our dream of qualifying for the 2022 World Cup in Qatar, something we’ll all work even harder for”

James joined Madrid in 2014 from Monaco after starring in the 2014 World Cup. He spent six years contracted to the club (two of which on loan at Bayern Munich) before joining Premier League side Everton this past summer, where international teammate Yerry Mina also plays.

Next up for Colombia is a clash with CONMEBOL leaders Brazil on March 25th before a trip to Paraguay five days later. Colombia are currently seventh in CONMEBOL qualifying, three points clear of bottom-placed Bolivia and eight behind Brazil.