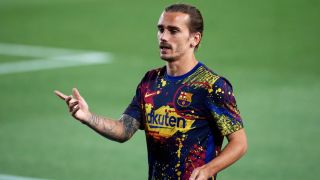 A recent report from ESPN Deportes outlined how Font was the early favourite to win the January elections, although there could be up to 10 candidates for the position.

Font told Cadena Cope on Wednesday night: “Griezmann was a signing that shouldn’t have been made.”

It was one of a series of eye-catching admissions from the presidential hopeful, as he once again talked up how Xavi Hernandez would be boss under his management and would have a high degree of control, including persuading Lionel Messi to stay at the Camp Nou.

Font also said: “If Xavi asked me to sign Sergio Ramos and it was economically viable, I would sign him.”

Griezmann plays through the middle for France and is at the centre of attacking moves, whilst he is often played on the periphery for the Blaugrana to help accommodate Lionel Messi.