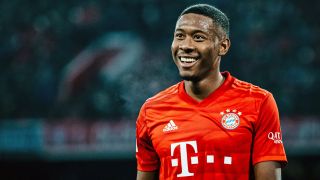 Real Madrid are said to have identified Bayern Munich defender David Alaba as their top target should club captain Sergio Ramos leave the club when his contract expires this summer.

Ramos is at loggerheads with the Santiago Bernabeu hierarchy over the terms of a new deal and has reportedly been offered a three-year contract by Paris Saint-Germain worth €20m per-season.

Into this context Alaba emerges, a player who’s proven himself to be an elite performer and has long held an interest in a move to the Spanish capital. He’s the number one target of Madrid should Ramos move on according to Diario AS.

At 28, the defender is coming into his prime years, and reports coming out of Germany have hinted that he’s currently at odds with the Bayern Munich management and a prompt departure is inevitable.

“Everyone knows about Madrid’s interest in my son,” Alaba’s father said back in 2018. Now, that interest is reciprocal and the right opportunity has arisen to make it happen.

Ramos, currently in a stand-off with Los Blancos over his future, wants a two-year deal, while Madrid, due to his age, are only willing to offer him a one-year deal with a second year possible if certain variables are met.