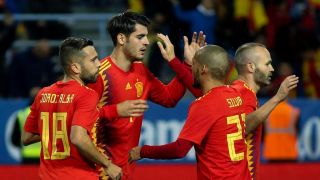 Alvaro Morata opened the scoring for Spain with a poacher’s header at the back post, the Juventus striker solving coach Luis Enrique’s biggest problem in recent times – a lack of goals.

Morata had the ball in the net once again moments later with a smart finish at the back post following a lighting-quick La Roja break, only for the referee to rule it out for offside. VAR wasn’t on duty, but they may have had something to say about it.

Alvaro Morata had this goal ruled offside by assistant referee – no VAR in this game. Decision would surely have been overturned if VAR was here. pic.twitter.com/xpl3oyAguQ

Born in Madrid, Morata began his career with Atletico Madrid before switching to the youth systems at Getafe and Real Madrid.

He then came through at Los Blancos before representing Juventus and Chelsea, with a second spell at the Santiago Bernabéu in between. He rejoined Atleti on loan from Chelsea before signing for Diego Simeone’s side in a permanent deal, but this summer left Spain for another spell with Juventus.

The Madrileño made his debut for La Roja in 2014, representing his country at the 2016 European Championships. He failed to make the 2018 World Cup squad – despite featuring in the qualification phase – due to poor club form.

Featured image courtesy of The National.