Valencia midfielder faces choice to represent either USA or England

Valencia midfielder Yunus Musah has burst onto the scene at the Mestalla this season and now faces a choice between representing the United States or England at international level.

The 17-year-old – who has represented England up to Under-18 level – has started against Wales and Panama for the US at senior level, but due to the games not being competitive those appearances do not tie him down to the nation at senior level.

As Marca outline, the midfielder thoroughly enjoyed his time with the US team this week with that call-up intended to give Musah a taste of international football and persuade him to commit his future to the nation, but it is still unclear as to which team he will opt for.

However, playing non-competitive games will not tie him down to that nation for the rest of his career, it could help sway him on a future choice.

Musah has featured in eight of the club’s first nine La Liga matches, starting seven, and scoring his first senior goal in this month’s 2-2 draw against Getafe.

Valencia teenage star Musah chooses to represent US and not England at international level
15 March 2021, 14:55 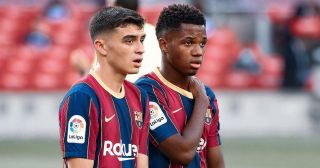