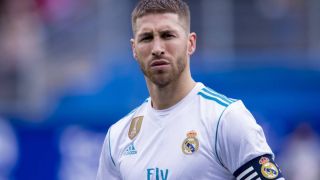 PSG were said to be the frontrunners for his signature should he move on from Madrid, with the moneyed French champions apparently willing to offer Ramos a three-year deal worth €20m per-season.

According to Le Parisien, however, and carried by Mundo Deportivo, PSG have not made any proposal of that kind to the Andalusian. They assert that the PSG hierarchy are more focused on balancing numbers amid expected losses of €120m than signing Ramos.

Even if the French champions manage to balance their accounts and have the economic space to move come the season’s end, they’re said to be planning on prioritising retaining Kylian Mbappe as opposed to bringing in Ramos.

Le Parisien, who are closely-connected with the club, wondered aloud whether Ramos is using PSG as a negotiating tactic in his discussions with Los Blancos.

Ramos’ preference is said to be to stay at the Santiago Bernabeu, and their preference is for him to stay too. The crux comes down to a question of time, principally.

Ramos wants a two-year deal, while Madrid, due to his age, are only willing to offer him a one-year deal with a second year possible if certain variables are met.