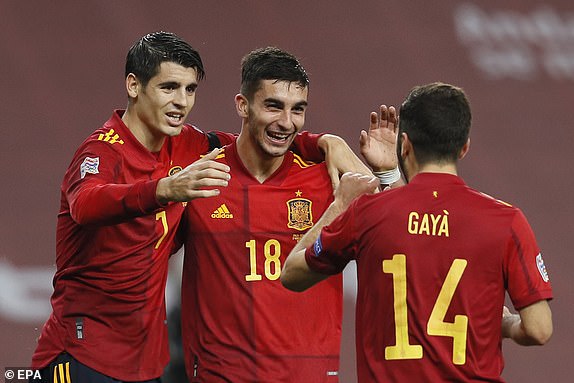 Spain tore Germany to pieces on Tuesday evening at La Cartuja, putting a remarkable six goals past their visitors to send themselves into the final four of the Nations League.

La Roja will also go into the winter full of confidence. They had been playing well under Luis Enrique, developing a strong high-pressing style, but had been unable to score the goals that ultimately win games.

That wasn’t a problem in Seville. Juventus striker Alvaro Morata opened the scoring for La Roja with a header at the back post before ex-Valencia winger Ferran Torres doubled their advantage with a clinical finish.

His teammate at Manchester City, Rodri, then made it three, scoring an excellent glancing header to claim his first-ever international goal and send his team into the break comfortable.

Spain had lost Sergio Canales and Sergio Ramos to muscular injuries in the first half, but their absence didn’t affect the way they started the second.

La Roja emerged from the break as potent as ever, scoring their fourth just shy of the hour mark. This time it was due to a smart break down the left, culminating in Jose Gaya unselfishly squaring for Torres to finish easily.

The hosts then truly entered dreamland and sent Germany into a waking nightmare with a fifth that also completed Torres’ hat-trick. This time he scored with a first-time right-footed finish from outside the box.

Then, to put the icing on the cake, they got a sixth. Gaya was once again involved, pulling the ball back from the left side for Real Sociedad captain Mikel Oyarzabal to score and cap a magnificent evening for Spain.

La Roja and everyone connected with it will now look forward to next summer’s European Championships with great excitement.