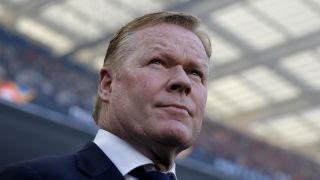 Barcelona expect to see four players leave in the January transfer window according to Diario AS.

The four players are Junior Firpo, Samuel Umtiti, Matheus Fernandes and Martin Braithwaite. Each player is its own case, with differing degrees of difficulty and ease involved in facilitating their exit.

Junior Firpo is the easiest. The Dominican isn’t in Ronald Koeman‘s plans and has had offers from Italy with his most likely destination being Inter Milan or Napoli.

The deal is expected to be a loan with an obligation to buy, with the fee apparently in the region of €20m due to the fact that Real Betis will earn a percentage of the sale.

Umtiti is most likely to leave on loan. Barcelona touted him around during the summer but the Frenchman refused to leave, although he now realises that he’s not rated by Koeman.

He’s now looking for an opportunity to play, but any deal is complicated by uncertainty over his injury record. Olympique Lyon are said to be interested, as are Roma.

Matheus Fernandes is a more difficult case. Like the others, Koeman has made it clear that he won’t form part of his Barcelona, but in this past summer his representatives refused to negotiate an exit.

The Brazilian had the option to join Monaco on loan, but listened to his advisors rather than to the club, causing significant tension between the two parties.

Now, the player himself is said to realise that he needs minutes to restart his career after playing sparsely during his loan spell at Real Valladolid. There is thought to be interest from Spain and Portugal.

Barcelona signed Braithwaite as an emergency option last January, with the expectation being that he’d be sold in the summer only for the pandemic to arrive and complicate matters.

The Dane is said to be keen to stay in Catalonia and fight for his place, but Koeman’s preference is to replace him with Lyon’s Memphis Depay. Should he make way, the Premier League is his most likely destination.