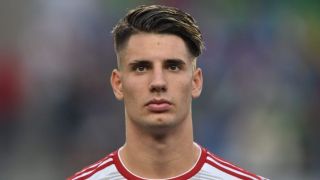 Real Madrid target keeping his options open regarding his next move

Real Madrid target Dominik Szoboszlai is said to be playing it cool and keeping his options open regarding his next move. The Hungarian has become a hot commodity in the European game thanks to his performances with RB Salzburg in the Champions League and with his country, and has attracted attention from across Europe.

Madrid are one of them according to Diario AS, with Los Blancos enticed by his profile and his potential, but Szoboszlai is said to be keeping his powder dry with declaring a preference. Still just 20, his next move is pivotal. RB Leipzig, linked closely with Salzburg given their common sponsor but without official ties, have long courted him, as have Milan. Arsenal, and specifically Mikel Arteta, are said to be big admirers of him.

Szoboszlai, despite his profile exploding in recent weeks, is said to be cautious about deciding his next move. His contract ends in the summer of 2022, and he’s said to have a minimum release clause of €20m with an extra percentage included on the part of Salzburg that could raise the fee to between €25m and €30m. Szoboszlai’s injury time goal against Iceland sent Hungary into Euro 2020, where he’ll have an even bigger opportunity to showcase his talents and potentially court even more admirers.