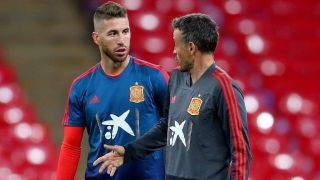 Remo Freuler’s first half goal edged the hosts in front, before Ramos was handed two chances to haul the 2010 World Cup winners into the game in Basel.

Ramos won the first penalty on 56 minutes, as Ricardo Rodrigeuz handled his effort, but Yann Sommer produced a fine save to end his successful streak of 25 penalties stretching back to 2016.

The 34-year old looked set to make amends for his miss with 10 minutes to go, as Nico Elevdi was sent off for fouling substitute Adama Traore, but Sommer frustrated Ramos once again from 12 yards.

Substitute Gerard Moreno finally secured a late draw for Enrique, but the former Barcelona manger was unflinching in his support of Ramos.

“Football is a wonderful sport, but sometimes it can be unfair and we see that in the final result,” he told a post match interview with El Chiringuito.

“Ramos’ ‘failures’ do not concern me. He has scored 25 penalties in a row. These things happen in football.

“If we had been given a third or fourth penalty, Ramos would have taken it.”

The result means Spain will now need to beat Joachim Low’s Germany  in Seville in midweek to secure a first ever place in the UEFA Nations League finals in 2021.