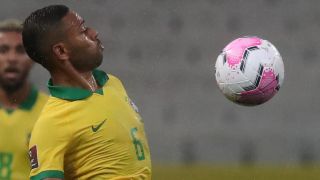 Atletico Madrid star Renan Lodi shined for Brazil on Friday evening in Sao Paulo as the Selecao beat Venezuela 1-0 in the latest fixture in the CONMEBOL World Cup qualifying campaign. Lodi has recently become first choice at left back for coach Tite due to Marcelo‘s decline and Alex Sandro’s inconsistency.

El Rojiblanco was one of the few bright spots for Brazil according to Mundo Deportivo, with the World Cup’s most successful nation struggling to overcome Venezuela at Morumbi. They won thanks to a Roberto Firmino goal in the 67th minute to take them a step closer to the 2022 World Cup in Qatar.

Lodi contributed to much of Brazil’s attacking play throughout, assisting for Richarlison to open the scoring only for VAR to rule the goal out due to an offside. He was again involved for Firmino’s legal strike, however, linking well with Lucas Paqueta and Everton Cebolinha before the ball found its way to the Liverpool number nine to get Brazil’s noses in front.

Brazil are top of the CONMEBOL table, two points clear of Lionel Messi‘s Argentina in second place. Next up for them will be a trip to Montevideo to take on Luis Suarez‘ Uruguay, who just delivered Colombia their worst defeat on home soil in 82 years. Lodi was born in Sao Paulo state and joined Atleti from Athletico Paranaense in 2019.