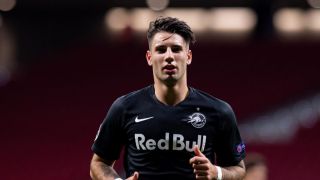 Real Madrid are said to be closely tracking Hungarian star Dominik Szoboszlai according to Diario AS. The 20 year-old’s signing would be in line with Madrid’s strategy in recent years of bringing in young players with bags of potential as opposed to established Galacticos, thus cutting out clubs with the financial strength of the Premier League or Paris Saint-Germain.

Juni Calafat, who’s in charge of Madrid’s recruitment, is said to have a vast network that tracks many of the global game’s best talents, one of them being Szoboszlai. The Hungarian midfielder has been performing well for RB Salzburg in Austria and scored against Atletico Madrid at the Wanda Metropolitano, with a goalscoring tally in the Champions League that stands at four so far this season including the qualification phase.

In the Austrian Bundesliga, Szoboszlai has one goal and six assists so far this season. He signed for Salzburg in January 2018 and is tied to a contract that runs until the summer of 2022 – meaning that should the club desire to cash in on their young star they’ll have to do it in the summer coming. His market value is €25m according to Transfermarkt. The youngster stole the headlines for his country last night by scoring a 92nd minute winner against Iceland to take Hungary to Euro 2020.

Arsenal, Milan and Leipzig are also thought to be keeping close tabs on him, with Mikel Arteta being a huge admirer. Leipzig share the same sponsor as Salzburg, so are perhaps best-placed to make the move. Madrid, however, are keen to inject energy into its midfield, with Isco expected to be allowed to leave the club for a fee in the region of €30m. Szoboszlai can play both behind the striker and on the left. Madrid have been slow to move due to the delicate economic situation that has come from COVID-19, but are aware that they may need to move in the winter market if results don’t pick up.