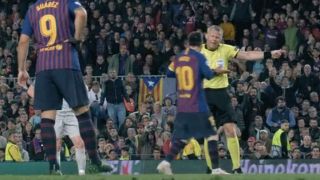 Lionel Messi told by referee: “Show me respect, you always do the same!”

Barcelona star Lionel Messi was accused of showing a lack of respect to referee Bjorn Kuipers in the 2018/19 Champions League semi-final against Liverpool.

That has been revealed in a new documentary entitled Man in the Middle which is set to air later this month, and which has had access behind-the-scenes to conversations between top officials and stars, in an insight into life as a referee.

The exchange between the Kuipers and Blaugrana captain Messi came at half-time in the first leg of the semi-final in 2019, when the teams were about to re-emerge for the second half.

As outlined by Marca, Kuipers told the star: “Messi! Come on! Hurry up and show me respect, you always do the same! Come on now!”

That was a semi-final which will go down in history for all the wrong reasons for the Catalan giants, who won the opening leg 3-0 before somehow contriving to lose 4-0 at Anfield – and miss out on a place in the final against Tottenham.