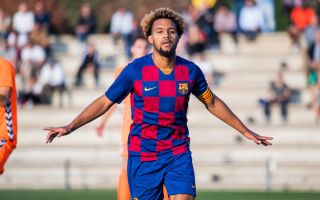 Despite as of yet not having made his debut for Barcelona, teenager Konrad de la Fuente could be in line to make his debut for the United States this international break according to a report in Diario Sport.

The Barcelona B player is unofficially considered to be part of the first team setup at Camp Nou, with the 19 year-old said to have impressed Ronald Koeman greatly since the Dutchman took over the reins at the club. Gregg Berhalter, the coach of the US, is said to be similarly enamoured with the winger.

De la Fuente made the squad for the US for their friendlies against Wales and Panama, with club team-mate Sergino Dest also included. He played a sum total of 73 minutes with the first team during pre-season, and gave supporters a glimpse of what they can expect from him – a fast, explosive wide-player with an eye for goal and the ability to disrupt opposing defences.

Gregg Berhalter has named a 24-player roster for the 🇺🇸’s November camp in Europe.

The #USMNT will face 🏴󠁧󠁢󠁷󠁬󠁳󠁿 on Nov. 12 in Swansea and 🇵🇦 on Nov. 16 in Wiener Neustadt, Austria.

Born in Miami to Haitian parents, de la Fuente joined Barcelona aged 12 and has represented the US at U16, U18 and U20 level. He made his debut for Barcelona B in 2018 aged just 17, and he also holds a Spanish passport.

Ten of the 24 players called up by Berhalter are debutants, including Valencia’s Yunus Musah and Borussia Dortmund’s Gio Reyna. Both would have to be considered to be at an advantage given their position within their respective first teams, but de la Fuente might not be far off achieving that status at Catalonia.

Ansu Fati‘s injury will mean that he’ll miss four months of action, and could open the door to de la Fuente to make his senior bow. As of now, Ousmane Dembele, Francisco Trincao and Martin Braithwaite are ahead of the American in the pecking order, but chances could emerge in the coming weeks and months.