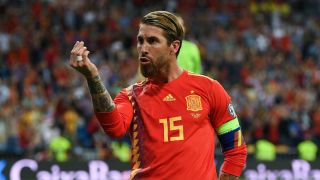 Spain and Real Madrid captain Sergio Ramos is set to break even more records this international break. The Andalusian, should he take to the field against the Netherlands, will equal Gianluigi Buffon’s record for the most appearances for a European national team.

One would expect that overcoming him will only be a matter of time – specifically, as AS point out, just three days. On Saturday, Spain play Switzerland in the Nations League, and so the record will be his and his alone.

Given that this evening’s clash with the Netherlands is just a friendly it’s expected that Ramos will start on the bench, but that coach Luis Enrique will bring him on at some point so as to continue with his extraordinary record. Come Saturday, according to FIFA, Ramos will hit 177 games for Spain, the same as Mexican international Claudio Suárez.

Ahead of him will be the Egyptian Ahmed Hassan on 184, Oman’s Ahmed Mubarak on 179 as well as the Saudi Mohamed Al-Deayea and the Kuwaiti Bader Al-Mutawa on 178. Ahmed Hassan retired in 2012, Al-Deayea also isn’t active, Mubarak and Al-Mutawa still play for their clubs but not their national teams, and Buffon has already retired from Italian duty.

Ramos eared his debut under Luis Aragonés in 2005, in a clash against China in Salamanca. Since then, he’s lifted the World Cup and two European Championships with La Roja, and has become one of the most decorated footballers of all time. Rumour has it that the Sevillano intends on representing Spain until the 2022 World Cup in Qatar. Should he reach it, he’ll have hit 200 games.