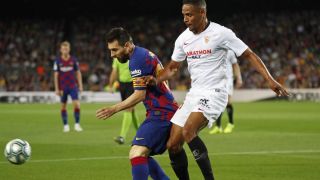 Sevilla star speaks out on side’s lack of goals

Sevilla midfielder Fernando Reges has spoken out about his side’s lack of goals.

Their performance is all the more disappointing given their strong campaign last season, when they finished fourth in the league table – level on points with Atletico Madrid in third – and won their sixth Europa League title.

Brazilian midfielder Fernando, speaking to Radio Sevilla and carried by Sport, has revealed that the dressing room isn’t ignorant to the problem.

“I think we are playing well but we’re not scoring goals,” he explained bluntly. “Last year we didn’t dominate but we scored more goals.

“I think we can get through this difficult time. If we pass through this period, I think we’ll reach the final stretch of the season with possibilities. The only problem now is finding the goal. If you look at our games against Eibar and Athletic Club, we played well but didn’t win. It takes a bit of luck, and I think [our luck] will change.”

Fernando, 33, has played in Europe since leaving Brazil to join Porto back in 2007. The anchorman has also represented Manchester City and Galatasaray.

To ease tension, coach Julen Lopetegui treated his charges to a break from training with a session of gymkhana, a session combining aim, skill and balance, while the internationals competed for their countries outside of Seville.