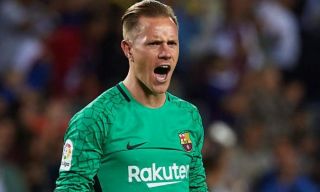 Marc-André ter Stegen: “I want to play at Camp Nou for many more years and continue winning titles”

Barcelona goalkeeper Marc-André Ter Stegen has assured that there is no greater goal for him than “to continue winning titles” at the club and he didn’t want to take “another path” other than to renew his contract with the Catalans.

“I want to play at Camp Nou for many more years and continue winning titles,” the German goalkeeper said as reported by Cope. “There is no greater motivation [for me]. I hope very soon to be celebrating [the titles] with our fans.”

Ter Stegen has just recovered from an injury and subsequent operation on the patellar tendon in his right knee that kept him out of action for 78 days. He’s glad to have returned to the starting lineup and reclaimed his place between the sticks.

“Barcelona has become my home, and my family’s home,” he continued. “Both on and off the pitch, we’re happy here. It was clear how [the contract renewal negotiations] were going to go.”

Ter Stegen’s release clause is said to be set at €500m, and he has extended his contract until June 30th 2025. Should he see out his deal, it will have meant that he has spent over a decade as a Barcelona player.

“My wish, and the wish of Barça, has always been to reach a renewal agreement and continue the story that began back in 2014. It’s not just playing for the biggest club in the world – it’s more than that. The city and its fans have treated me as one of them from the very beginning, and that’s important to me. It’s a feeling I’ll never forget.”

Now 28, Ter Stegen began his career with his local club, Borussia Mönchengladbach. He signed for Barcelona in the summer of 2014 for a fee in the region of €12m, and initially had to contend with Claudio Bravo for the number one shirt. He’s served as a senior German international since 2012, although he has just 25 caps to his name due to tough competition with Manuel Neuer.