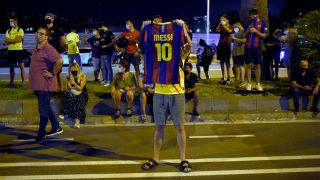 Barcelona have released an update on the salary reduction negotiations they’re currently undergoing with the representatives of the club’s professional footballers and the corporate staff.

“Today, November 11th, after several days of intense meetings and negotiations exhausted, the parties have ended the consultation period without reaching an agreement,” the club announced in a statement.

“In this situation, it’s up to the Management Board to adopt decisions to solve the serious financial problem derived from the COVID-19 pandemic, which cause a reduction in the club’s income of more than €300m for the 2020/21 season and has forced a need to readjust the wage bill by €191m.

“The parties have agreed to grant each other until November 23rd to reflect and decide whether the proposals that are currently on the table can be accepted.”

The news comes at a time of change on and off the pitch at Camp Nou. Former president Josep Maria Bartomeu has recently left the club, resigning and taking his board with him following widespread discontent amongst the supporters.

Quique Setien was relieved of his duties after half-a-season in the dugout following a late-season collapse in the league title race and a historic 8-2 humiliation at the hands of Bayern Munich in the Champions League.

There was changes in the dressing room too, with veterans of the 2015 treble including Luis Suarez and Ivan Rakitic shown the door for cut-price fees. Lionel Messi, their talismanic club captain, tried to follow his friends out the door only to be blocked by contractual fine print.

Barcelona face a tricky few months ahead in negotiating the aforementioned salary reduction, transitioning to a new board, competing on the pitch and retaining the services of a wantaway Messi, who’s free to sign a pre-contract with whoever he likes come January 1st.