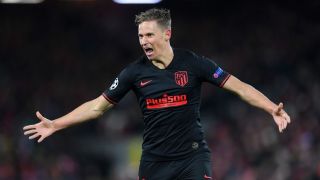 Marcos Llorente is living the dream with La Roja

Atlético Madrid midfielder Marcos Llorente is living the dream having been called up by Spain for the forthcoming international break.

Luis Enrique’s side face the Netherlands in a friendly before Nations League clashes with Switzerland and Germany, and Llorente could be in line to receive his first senior cap.

Llorente began his career with Real Madrid but proved unable to break into the starting lineup despite a productive loan spell with Alavés. He comes from footballing stock – his father Francisco, great uncle Francisco Francisco Gento and maternal grandfather Ramón Grosso all played for Los Blancos.

He crossed the city in 2019 to join Atleti and hasn’t looked back since – he’s been reinvented as a second striker and, lauded for his incredible fitness levels, has grabbed three goals and two assists in seven league appearances this season, following on from a strong finish to 2019/20.

4 – @atletienglish's Marcos Llorente has both scored and assisted in the same game for the 4th time in all competitions since the start of 2020; only Lionel Messi (5) has done so on more occassions among LaLiga players in that time. Stellar. pic.twitter.com/yAIcDOnFir

Llorente expressed his feelings to the Royal Spanish Football Federation as quoted in Mundo Deportivo. “You hear a lot of rumours throughout the weeks, but until you see the list and your name you just don’t believe it,” he said.

“We were training and after half an hour or so they yelled at me that I was going to play for Spain. When I picked up my mobile I saw many messages of congratulations. I know several of those who’ve been called up, whether they be teammates or rivals, in addition to those I played with at U21 level, so I’m very happy because the transition will be easier.”

Llorente also spoke about how he’s adapted to his new position. “At the beginning you can be a little bit lost playing in a new position because I had never played higher than the pivot. It’s different when it comes to pressing, but I feel comfortable there – whatever position Cholo [Diego Simeone] creates for me, I’ll contribute.”

Llorente has previously represented Spain at U19 and U21 level.