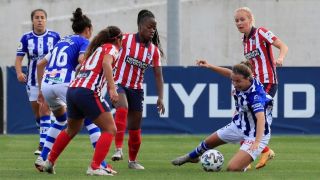 Atlético Madrid took advantage of Barcelona’s recent postponements to take over leadership of Primera Iberdrola ahead of their crunch meeting with their title rivals this week.

Last Thursday they negotiated a tricky trip to Eibar, winning 1-0 through Merel Van Dongen’s second goal of the campaign, but on Sunday they were unable to break down struggling Sporting Huelva, who held out for a 0-0 draw and their first point of the season. It was a huge result for Jenny Benítez, who took over from Antonio Toledo following Sporting’s heavy defeat against Sevilla and was unlucky to miss out on picking up a point on her debut – a 1-0 defeat by Betis.

But for Atlético, it was an immensely frustrating game, with many echoes of the dropped points in mid-season which ultimately ensured they relinquished their title last season and although they have the lead in the table, this result was hardly the best one to take into Wednesday’s big game.

Contests between these two sides have often proved critical in deciding the ultimate destination of the league title in recent years and any kind of positive result for Atleti in the Catalan capital would help to show the rest of the league that the champions are not untouchable.

Asllani leads the way as Madrid pick up pace

Swedish forward Kosovare Asllani is probably Real Madrid’s most recognisable name worldwide thanks to her performances in leading Sweden to third place at the last World Cup. Her role in that no doubt played a large part in persuading Madrid to make her the first big name signing for their new project and so far this season, she is delivering the goods.

Two wins in the last week have moved them up to fifth place and Asllani has contributed four goals to take her total for the season to six and move clear at the top of the scoring charts.

After her Sweden teammate Sofia Jakobsson had opened the scoring, Asllani scored twice to secure victory against Depor last Wednesday. Then following an underwhelming first half at Eibar, she kept her nerve to score from the spot twice after the home side had been penalised for handballs.

After their humbling debut against Barcelona, Real Madrid are slowly but surely building momentum and their midweek meeting with the season’s surprise package UDG Tenerife is one to keep an eye on.

Last season, newly promoted Deportivo Abanca caused a stir by finishing fourth but this season they find themselves stuck at the bottom of the table with six defeats out of six.

Their performances haven’t been as catastrophic as results would suggest, in most games they have lost out by the odd goal but once you’ve got into a rut, it becomes harder and harder to break out of it.

Sunday night against Sevilla should have been that moment for them. Given the opportunity to play in the Estadio Riazor, admittedly not as big a moment as it would have been with a large crowd behind them, they had recovered from going behind to Zenatha Coleman’s opener and after Stephanie Blanco’s equaliser were pushing for a winner when they were caught by a sucker punch. With 95 minutes played, Sullastres came to try and claim a cross but the ball was headed back across goal for Raquel Pina to apply to lightest of touches to put it into an empty net.

After such a brutal ending to the game, Depor would relish an opportunity to get back into action straight away, but their midweek fixture with Rayo Vallecano, the only other side without a point, has already been postponed.

Covid-19 continues to cast a shadow

With the notable exception of July’s infamous meeting of Depor and Fuenlabrada, elite football in Spain has largely managed to negotiate the problems of playing in the world of Covid-19 reasonably successfully.

But several recent positive tests among Primera Iberdrola clubs have come at the worst possible time, as the league plays a few midweek rounds in an attempt to make up for the delayed start.

Rayo Vallecano, already playing catch-up after their opening two fixtures were postponed due to their late return to pre-season, are now facing an even greater pile-up with their midweek fixtures with Barcelona and forthcoming ones against Betis and Depor now having to be rescheduled.

Speaking of Barça, the champions now face a second successive matchday kicking their heels on the sidelines as their visit to Levante, probably their sternest test of the campaign so far, had already fallen victim to postponement earlier in the week after positive tests in the Valencian club’s squad last weekend.

Then this weekend brought late postponements for the matches between Espanyol and Athletic and Madrid CFF and EDF Logroño. With the swift postponements, the women’s game has dealt better with the situation than La Liga, considering the slightly farcical situation surrounding the Real Sociedad – Granada game this weekend.