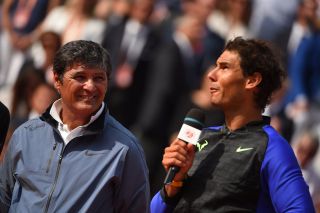 Toni Nadal has spoken about joining Víctor Font’s bid to become president of Barcelona, explaining that “I don’t get involved in politics – I get involved in helping a sporting institution.”

Nadal was announced as Font’s latest signing on Friday as the race to become the next president of the Catalan club has begun to intensify.

Speaking with Onda Cero’s El Transistor, Nadal said that he feels excited with the project put forward by Font and has joked that he’ll refrain from talking about football with his nephew Rafa Nadal, who’s a Real Madrid supporter as well as a tennis legend.

Nadal believes “the first thing is to try to win. We know that the club’s situation is really complicated, and that’s why change is necessary.

“[Font] spoke to me about a series of issues and one of them is to achieve a great commitment from all the people involved in the club. We want all the players – from the first team to the youngsters – to know what it is to wear the Barça shirt.”

Font, for Nadal, is “a very correct guy, very prepared and a good person who will be good for Barça,” but he’ll be staying out of the political dynamic. “I don’t get involved in politics,” he said. “I get involved in helping a sporting institution.”

Nadal is the ex-tennis coach of Rafa, and will be on Barcelona’s Board of Directors should Font be successful in his campaign to become club president.

Nadal will work in an area that Font is proposing to establish – governing behaviour – as well as in Institutional Relations.

Born in Mallorca, Nadal is the brother of former Barcelona player Miguel Ángel Nadal and coached Rafa from 1990 until 2017.

Known to be a disciplinarian and a tough competitor who strived to have his charges take responsibility for themselves, the 59 year-old would appear to be a valuable addition to Font’s vision of what a new Barcelona could look like.