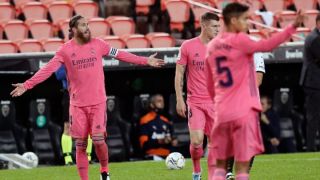 Real Madrid: The first grande to concede three penalties in one game

Real Madrid have become the first grande to concede three penalties in one game. The historical feat occurred during their 4-1 defeat at the hands of Valencia at Mestalla on Sunday evening.

Madrid took the lead through an early Karim Benzema goal before Valencia turned the tie on its head through three penalties and an own-goal.

Neither Barcelona nor Atlético Madrid have achieved the feat before, making Madrid the first of Spain’s big three – or grandes – to do so. “Gil Manzano’s performance will go down in history,” wrote Carlos Forjanes in AS.

“It’s the first time in the history of LaLiga that Real Madrid have received three penalties against them in the same game. It’s never happened to Barcelona or Atlético.

“According to Mister Chip, this has only happened nine times previously in the history of LaLiga. Gil Manzano’s role has generated and will continue to generate rivers of ink, also occupying the air waves. It’s a night he won’t forget.

“The curious thing is that Madrid had only lost three times in the 32 games that Manzano has been at the whistle for until yesterday. He’s also one of the referees who’ve awarded Madrid the most penalties in the past, with eleven.”

1️⃣ His 1st ever career hat-trick.

2️⃣ The 2nd man to score a hat-trick for Valencia against Real Madrid.

3️⃣ The 3rd player to score a hat-trick of penalties in LaLiga.

The result sends Madrid into the international break with cloudy skies overhead. Zinedine Zidane’s side had been pleased given their 3-2 win over Inter Milan in the Champions League last Wednesday, but now find themselves fourth in LaLiga.

They return to the Valencian community following LaLiga’s restart to face a Villarreal team flying high under Unai Emery and second in the table behind Real Sociedad.

Then, Los Blancos travel to Italy for a titanic Champions League return leg with Inter. Both games could do much to clear the aforementioned cloudy skies – or they could intensify them.