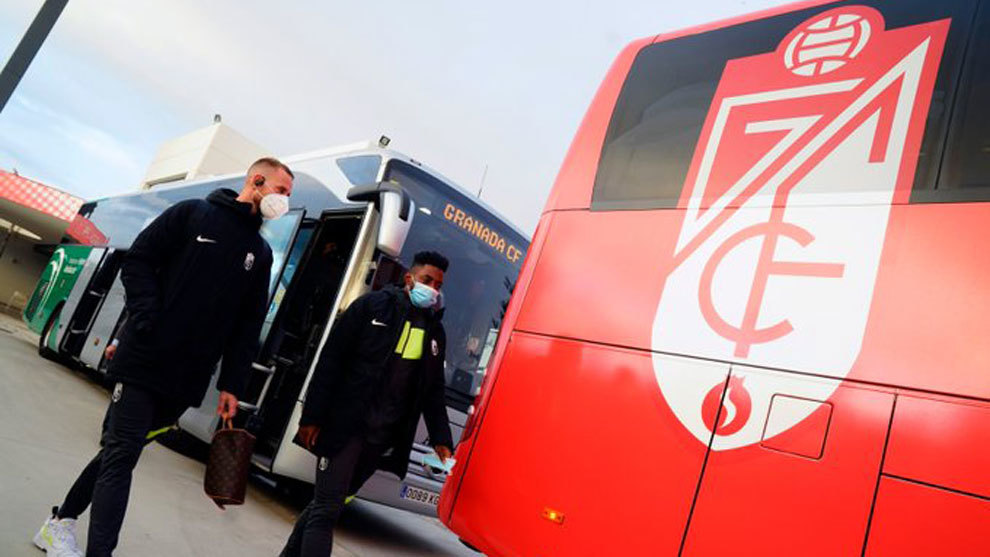 This weekend provided a stark reminder that this season is nowhere near a normal one that we are watching in La Liga this season. The competition is already distorted by the fact that no teams are playing in front of fans, fundamentally changing the natural conditions of football and severely hampering some sides that thrive off the energy transmitted from the stands, such as Osasuna and Alavés. But this weekend, fair competition was even further obscured, this time directly by the virus.

This week, Granada were the victims of perilously concertinaed scheduling and a by-any-means-necessary attitude of getting fixtures fulfilled that hampers fairness of competition and resigns consideration for the physical toll on players’ bodies to an afterthought. But there could be another team next week that falls to the same fate, or any number of others in any given week through the course of the season.

Real Sociedad against Granada was reduced to near farce after the Andalusian side were hit with ten Covid-19 positive results in the week leading up to Sunday’s game. Granada ultimately fell 2-0 to the Basques, finishing the game with an ‘illegal line-up’ that had only four professional players and a string of youngsters making their first appearances in senior football.

Monreal with the breakthrough for Real Sociedad! 🔵⚪

A tidy finish from the defender as the ball breaks loose from a corner 👏 pic.twitter.com/Ks6H0vNye8

As with any contraction of Covid-19, a certain amount of bad luck is involved – but La Liga believe there was also a level of negligence on behalf of Granada at play. On the Friday, Monday, and Tuesday prior to their trip to Cyprus in the Europa League, the club detected a total of six positive coronavirus results within the camp.

League authorities made it clear in a strongly-worded statement that three or more Covid-19 positives found simultaneously or within a short period of time of one another qualifies as an outbreak, and therefore other members of the squad should enter quarantine, and, according to La Liga, the club should not have travelled to Cyprus to play out their Europa League group stage clash with Omonia Nicosia.

Granada travelled to the Mediterranean island and beat their Cypriot opponents 0-2 to take charge of Group E in their first ever season competing in Europe. They also requested multiple times to La Liga to postpone their game with Real Sociedad once they found even more Covid-19 positive cases within their camp – a total of ten by Friday.

Their calls were denied, and La Real somewhat easily dispatched a depleted Granada 2-0 to stay top of the Spanish top flight. Seven first-team players started the game, with four youth teamers joining them on the pitch and a further eight academy players on the bench. 18-year-old Ángel Jiménez made his debut in goal and even saved a penalty that he will never forget – one of the few bright spots for the ‘nazarí’ club. Three of the senior players were substituted during the course of the match resulting in the Andalusians playing with an illegal lineup containing only four senior professional players – below the required minimum in La Liga’s protocols for this season.

But why were they forced to play this match out? For any neutral watching, it was not much of a spectacle. Granada had an almost impossible task ahead of them, Real Sociedad knew the situation their opponents were facing, and it was a relatively straightforward three points for the home side.

“If you’re more worried about the health of your players than the result, then this is not football,” club director Antonio Monterrubio said, defending the club’s moves and criticising the fact that they were forced to play ahead. He argued that the club notified local Andalusian authorities as well as La Liga, and nobody told them they could not travel to Cyprus. “Nobody has any answer, and the game [against Real Sociedad] went ahead,” he lamented.

The calendar for the 2020/21 season is extremely compressed given the campaign started much later than normal and must finish at the same time, given Euro 2020 will theoretically be played in the summer of 2021. Organisers will understandably want to avoid postponing games due to the limited windows in the schedule that can accommodate rearranged matches – but is the calendar so sacred that league games must be reduced to little more than fulfilling the fixture? Can this Real Sociedad-Granada fixture genuinely be called ‘competition’?

If Granada had not made the trip to Cyprus for the Europa League clash, there are minimal slots to fulfill the fixture before the Round of 32 begins in February. Next week is an international break, and further European or Copa del Rey fixtures take up practically every midweek until then. The scheduling for the 2020/21 calendar did not account for postponing many matches, all in the name of getting every competition played and finished by an agreed date.

If league authorities find that the club deviated from protocol and put their own players in danger by travelling to Cyprus when they should not have, then they deserve to be punished in an appropriate way. But if La Liga, or any other league for that matter, see a repeat of this week’s Granada situation at other stages of the season, and depleted squads either have to field teams of players who cannot legally drink alcohol, or else forfeit matches, then the necessity for kicking off the European Championships on June 11, 2021 must be brought into question.

Real Madrid were hit by the Covid-19 positives of Eden Hazard and Casemiro and were unavailable for their game against Valencia on Sunday night. Two first-choice players is nowhere near as impactful as the majority of the senior squad, but it is worth pondering where should the line be drawn that defines too many force majeure absentees for a game to go ahead? And with such a complicated schedule, what is the appropriate course of action in such a scenario? This weekend, La Liga chose that the answer was to push ahead with the teams playing out little more than a formality.

We need to talk about João Félix. The Atletico Madrid star has taken a huge step up from last season, when he showed glimpses of his magic, interspersed with performances where it was clear he was still finding his feet. Now, he is clearly won the trust of Diego Simeone, who is now starting to build the team around him, and the exciting forward is delivering powerful performances on a much more consistent basis. The Portuguese has now scored six goals in his last four games in all competitions and has been ripping opponents to shreds in La Liga, with dominant and decisive games. He turns 21 on Tuesday and must now be spoken about as a candidate for best player in the league.

Villarreal showed devastating efficiency to tear Getafe apart in their 1-3 win away from home. All three goals had a lot in common, with Villarreal showing their ability to cut teams open with one- or two-touch passes across the forward line and very quickly change the angle of attack. The yellow submarine found their assists with a first-time header across the box, a fabulous one-touch move that started outside the box, and a ball from deep beyond the defensive line for one striker to set up the other for a first-time strike. The likeness of the attacking moves that brought the goals showed very clearly how well-trained the team is. Emery’s side are finding their rhythm and now sit second in the table, only losing once so far this season.

Valladolid got off the mark and earned their first win of the season. A 2-1 victory over Athletic Bilbao will frustrate the Basques a lot after their good showing last week to beat Sevilla. The win lifts Sergio González’s men off the bottom spot, where they have been replaced by Huesca, the only side left looking for their first La Liga win. Paradoxically, with six draws from nine, Huesca have proven themselves difficult to beat this year, as sides like Atletico Madrid, Villarreal, and Valencia have found out.

It was a day to forget in particular for Athletic Bilbao goalkeeper Unai Simón, at fault for both of the goals. The Spain national team third-choice goalkeeper has been in decent form otherwise, and will be bitterly disappointed with his two errors.

After a seven-goal thriller this weekend, the last 26 encounters between Barcelona and Real Betis have now served up an average of over 4.5 goals per game.

For the first time in La Liga history, Real Madrid conceded three penalties in the same game. Valencia might be the most fun team to watch this season, with high-scoring unpredictable matches packed with chaos and drama.

Levante played their first game in their reconstructed Ciutat de Valencia stadium this weekend. They inaugurated their new-look ground with a disappointing 1-1 draw with Deportivo Alavés.

Óscar García has become the first manager this season to be fired. Celta Vigo have struggled to find form this season and are languishing just outside the relegation zone.

On November 8, Lionel Messi finally scored his first goal of the season from open play, after he was dropped from the starting lineup for the first time in a year. At half time against Betis, the Argentine replaced Ansu Fati, who suffered a meniscus tear and must undergo surgery, in a big blow to lovers of exciting football.

Goal of the week: Mauro Arambarri’s thunderous missile nearly broke the net when he equalised for Getafe against Villarreal. However, it was a game of four brilliant goals and any of them could be worthy of being named goal of the week.

A STUNNING strike from Arambarri! 😱

An instant response from Getafe, and Villarreal have since gone straight back in front through Manu Trigueros 🔥 pic.twitter.com/DfbIJo10kd