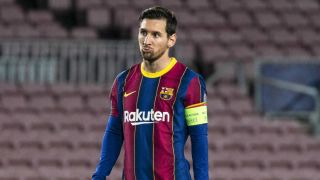 Lionel Messi came off the bench at half-time for Barcelona against Real Betis on Saturday afternoon to deliver 45 minutes of pure excellence.

The Argentine had been rested after suffering a knock pre-game, and many felt that it was an opportunity to consider a Barcelona team without his presence – something that may become a reality in the near future given the uncertainty around his contractual situation.

(not to mention the 'assist' for Griezmann's goal… 😱)#BarçaRealBetis pic.twitter.com/1dbCxcnGq7

The score was 1-1 when Messi took to the field, and four minutes later he assisted for Antoine Griezmann to regain Barça’s lead – only, he didn’t.

Instead, he artfully allowed Jordi Alba’s centre to run past him and find Griezmann with an open goal, in the process taking out both Claudio Bravo and Marc Bartra. It was a moment of utter genius.

Messi had started and completed the previous 37 matches for Barça, but looked far from jaded at Camp Nou on Saturday. 12 minutes after his sublime dummy he made it 3-1, perfectly placing his penalty kick into the top corner of the net.

Then, in the 82nd minute, Messi added a second, his first from open play so far this season – like the penalty, he turned smartly in the area before pausing and then unleashing a driven effort quicker than the speed of sound past Bravo.

Barça won the game 5-2, but the key takeaway was once again Messi’s brilliance. Jaime Rincón, writing in Marca, quipped that Messi is the best without running or even touching the ball – a nod to the controversy over the viral clip against Dynamo Kyiv.