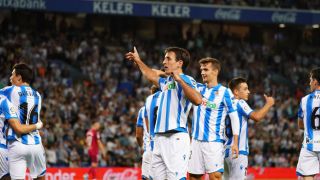 Real Sociedad captain Mikel Oyarzabal has been named LaLiga Santander player of the month for October according to Sport.

Oyarzabal, still just 23, played a decisive role in all three of La Real’s victories in October, contributing three goals (two from the penalty spot) to bring his season tally to five – the highest in the entire division [today’s goal against Granada has made it six].

Oyarzabal, who LaLiga described as the “soul” of Imanol Alguacil’s team, inherits the title of player of the month from Barcelona winger Ansu Fati, who earned the September equivalent.

He looks like he’ll eclipse his record of 10 goals last season before we even reach Christmas. pic.twitter.com/CmP6K4IdJ7

Born in nearby Eibar, Oyarzabal joined La Real at 14 and has spent his entire career with the club aside from a loan spell with his local club, Eibar.

He’s made 219 appearances for the club, scoring 58 goals and contributing 39 assists according to Transfermarkt. At international level, Oyarzabal has been capped by Spain nine times and scored three goals.

La Real are flying high in LaLiga this season. The San Sebastián outfit sit top of the league, two points clear of second-placed Villarreal, with much of their good form down to their captain and the partnership he’s developed with La Roja legend David Silva.