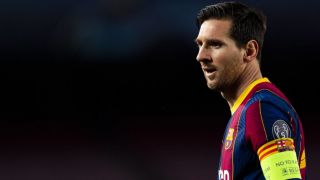 Lionel Messi furthest away from Barcelona in salary reduction negotiations

Lionel Messi and the Barcelona management are at odds regarding the prospect of a salary reduction according to Deportes Cuatro.

No agreement has been reached for a cut, with both parties extending the deadline for agreement until next Wednesday.

Barcelona want to reduce all players’ salaries by 30% – saving the club in the region of €190m – but the players want to wait until the new board are in situ.

Carles Tusquets, president of Barcelona’s Managing Committee, could unilaterally reduce the footballers’ salaries – but that could lead to a strong complaint from the players that could even be taken to court.

To avoid this scenario, the idea is to reach an agreement with the players. But the dressing room doesn’t agree with the club’s proposal and the player furthest away – according to El Larguero – is Messi.

The Argentine is still thinking of leaving Barcelona and knows that Manchester City could offer him a pre-contract in January. Paris Saint-Germain and Inter Milan are also reportedly interested in the forward.

Messi is said to be waiting for Barcelona’s new board of directors to be appointed before making a decision, but a major obstacle is that he has no more years in his contract to spread across his salary.

This makes it difficult for him to take a cut without extending his contract, like Gerard Piqué, Marc-André ter Stegen, Clément Lenglet and Frenkie de Jong have done.