The Real Madrid players who have Zinedine Zidane’s trust, and those who do not

Real Madrid boss Zinedine Zidane is always adamant that he trusts in all his players, but analysis from Marca argue how the Frenchman has shown his clear preference for some players over others.

After 10 matches this season, five players have featured in all the games – Thibaut Courtois, Karim Benzema, Casemiro, Fede Valverde and Luka Modric, although the Croatian is only eighth in the number of minutes played and third in the list of central midfielders.

There are three defenders who have played whenever they have been available and are all clearly crucial to Zidane’s project; captain Sergio Ramos, Raphael Varane and Ferland Mendy, while all right-backs have been injured – notably Dani Carvajal, Alvaro Odriozola and Nacho Fernandez. 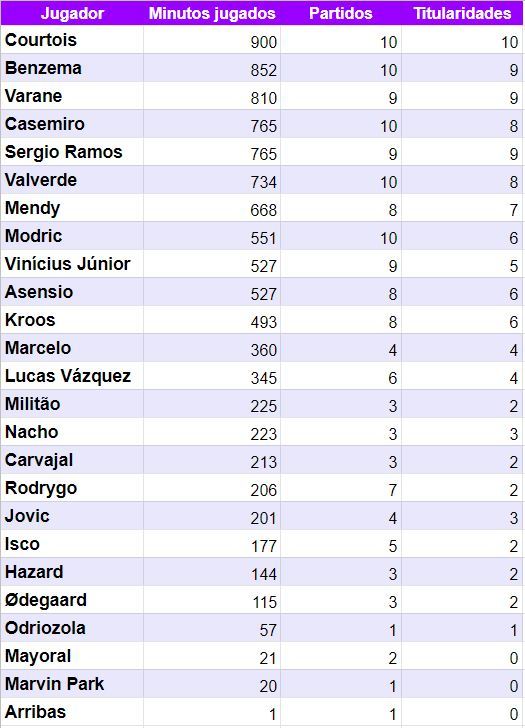 Marco Asensio is being eased back into the first-team – playing eight games and with increasing prominence, while it is also likely that a fully fit Eden Hazard will be a regular started for Los Blancos and the same is true for Martin Odegaard.

Vinicius Junior and Rodrygo Goes meanwhile are played frequently in the absence of others but are usually substituted on or off and play a disproportionately high number of games to minutes.

Of those who are firmly peripheral figures – Isco is suffering the worst moment of his Madrid career while Marcelo has fallen firmly behind Mendy in the left-back preference.

Luka Jovic and Mariano Diaz continue to struggle to get any notably involvement, while the same is true for defender Eder Militao.