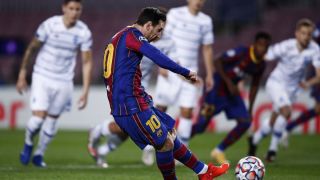 Dynamo Kiev teenage goalkeeper Ruslan Neshcheret put in a starring performance in a narrow 2-1 defeat against Barcelona, as Marc-Andre Ter Stegen made several important stops for the hosts.

Ronald Koeman’s side made it three wins from three in the Champions League group stage thanks to an early Lionel Messi penalty and Gerard Pique header, but Viktor Tsigankov pulled a goal back late on to set up a nervy finish.

Yet it was the two goalkeepers who were the most impressive performers on the night with Nescheret only in the side because of a spate of positive Covid-19 cases and injuries meaning the Ukrainian side were without 13 first-team players, including their two first-choice goalkeepers.

Ter Stegen meanwhile was making his first appearance of the season for the Blaugrana after recovering from a knee injury.

Barcelona made it three straight victories in the competition as both sides were frustrated by the opposition goalkeepers, with the Catalan giants now looking to the weekend to end their four-game winless run in La Liga.