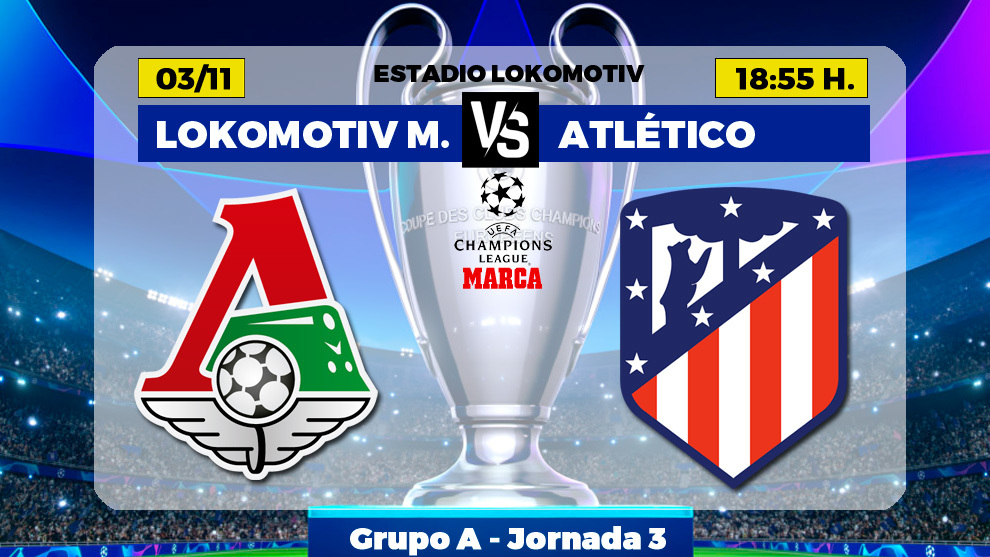 Atletico de Madrid’s third Champions League match of the campaign pits them against an opponent they know all too well. In fact, Tuesday’s game against Lokomotiv Moscow – known as The Railroders in Russia – is the third meeting between the sides in the last four European campaigns.

The first such meeting occurred in the Europa League Round of 16 in 2017/18, when Atleti defeated the Russian side 8-1 on aggregate on way to winning the competition. The next fixtures came in the 2019/20 Champions League group stage where Atletico defeated The Railroaders in both matches by a score of 2-0.

However, this season is truly a unique campaign for Lokomotiv in European football’s elite club competition. Their first match in the 2020/21 Champions League group, a 2-2 draw away against RB Salzburg, was the first time Loko played a match in the competition not under the supervision of veteran Yuri Semin. The 73-year-old had four spells in charge of the club winning three Russian Premier League titles (2002, 2004 and 2018), the only three titles won by the club in its history both in the Soviet and Russian eras.

Despite Loko being second in the 2019/20 Russian Premier League with eight games to go, they decided to replace Semin with Marko Nikolic, who has won titles in his native Serbia and Hungary with Partizan Belgrade and Fehervar respectively. Nikolic managed to remain unbeaten for the remaining matches of the 2019/20 campaign after his appointment at RZhD Arena, securing a second-placed finish and Champions League qualification.

Despite their participation in the Champions League, many in Russian football circles expect 2020/21 to be a transitional year for Lokomotiv. Not only is Nikolic new to the managerial hot-seat, he is also without key playing personnel from last season. The most notable loss is Aleksey Miranchuk, the 24-year-old attacking midfielder almost carried Lokomotiv by himself with his performances. This summer, having kept track of his performances, he was bought by Atalanta for €14.5m. Another big loss for Loko when they play Atleti is holding midfielder Dimitri Barinov, who suffered an ACL injury in August in a league match and will miss the entirety of the Champions League group stage.

Due to the departure of Miranchuk, Nikolic has recently switched formation. Gone is the 4-2-3-1 utilised by the aforementioned Semin and initially continued by Nikolic. In its place in recent games has been a 4-4-2 with two deeper central midfield players, out and out wingers on either flank and two strikers. Key players for Lokomotiv include Polish central midfielder Grezgorz Krychowiak, a familiar face to many La Liga fans due to his past at Sevilla, attacking midfielder/winger Anton Miranchuk, the aforementioned Aleksey’s twin brother who has flourished in Aleksey’s absence and Brazilian central defender Murilo Cerqueira.

Many in Russian football circles, including my colleagues at Russian Football News did not expect much from Lokomotiv in this season’s Champions League campaign. We indeed predicted them to struggle to get even one point! Nonetheless, we have been pleasantly surprised by both of their battling displays so far; a 2-2 draw at RB Salzburg and a heroic 1-2 home defeat to defending champions Bayern Munich. Their realistic expectations are to try to snatch third place ahead of RB Salzburg and secure Europa League football in the new year.

With Salzburg having Bayern in their next two games, Lokomotiv must take advantage of this home game. Furthermore, they are expected to to suffer defeat when they travel to Madrid to play Atleti. Lokomotiv have actually lost their last two games domestically, however, they are not the only side from across Europe’s leagues who are struggling to combine domestic and European fixtures in football’s relentless calendar in 2020/21.

My heart says that Lokomotiv will summon the courageous spirit of their last two performances in Europe once more to secure a draw against Atleti. My head is maybe leaning towards a very strong Atleti edging the game, but expect an intriguing game in Russia’s capital.